Even though iGaming and land based casino industries are very close, they have lots of differences. Therefore, developers who succeeded as suppliers of cabinets for brick-and-mortar operators have a hard time entering online market. However, there are companies that were able to get recognized by iGaming world as well. Ainsworth is one of them; however, it’s not the most famous one.

There aren’t many operators on the list of Ainsworth casinos. But their number is expected to grow since the developer has decided to distribute its software through several popular platforms. Usually online casino content suppliers are based in European countries and Ainsworth is a rare exception because it’s an Australian company. Show more

Following its success as a land based casino developer, the company started to expand, and the result of this expansion were offices in two US cities, UK and Asia. Their history began in 1995, meaning that they have over two decades of experience. But that’s only true about their division producing Ainsworth slot games for offline gaming sector. It took the company 18 years before it made a decision to enter online industry.

Ainsworth and Aristocrat are two major competitors which share the same path. They both specialize on offline gaming and now try to promote themselves as online content suppliers as well. But they have more in common. Basically, they were founded by the same person – Len Ainsworth.

This is a reliable developer that legally operates in many jurisdictions. It even has acquired Nevada Gaming Commission license. Their games had been tested for over 20 years by professionals and casino enthusiasts, so it’s definitely safe for anyone to play at one of reliable Ainsworth casinos.

As the company’s primary focus is their products for land based operators, you won’t find a lot of their games online. There are around 40 video slots developed in an HTML5 format, and that makes them available on mobile devices as well.

There isn’t much to tell about their online products. Frankly, they look worse than average slots produced by decent developers. But punters play them anyway, meaning that there is something attractive these games offer. However, it’s not graphics because most of the slots aren’t visually appealing. They have this shiny, old look which is commonly used in slot machines at land based casinos.

In their portfolio of products there are nine types of game cabinets. And by looking at those cutting edge cabinets you can say that this developer performs much better as an offline game supplier. The same video slot would feel absolutely differently online and at the brick and mortar casinos.

Best Ainsworth casinos online would miss two exciting licensed video slots: The Magnificent Seven and King Kong. These are famous movies which have a strong spirit of adventure, and the company made great games based on these thrilling stories. As of today, these titles aren’t available, but in the future the company will probably bring these two games online.

Video slots all look and feel similarly, and you understand that after playing some of them at reliable Ainsworth casinos. Despite the fact that all games have different themes, symbols and characters, they share the same style. When looking at land casino slots, you might think that the company produces high quality games, but when visiting gaming website you’ll get a completely different impression.

Don’t expect Ainsworth video slots to offer you great gameplay either. Typically slots offer free games, multipliers and some other basic features. But, there are sometimes quite interesting options. For instance, Big Thunder slot has one extra reel with just Ainsworth logo and a crown symbol. If you get five of a kind along with a crown on the sixth reel, you get a Major bonus, which is a nice amount of credits. There are also Maxi, Minor and Mini bonuses offering smaller prizes.

Big Thunder is one of the most interesting titles available at best Ainsworth casinos online. Flying Horse is another title with interesting gameplay, but its graphics seems to be too annoying. During free spins you’ll have 5×9 reel set and stacked wilds. To increase your chances of winning, there’ll be expanding wild feature activated during bonus mode.

There aren’t many operators on the list of Ainsworth casinos, but their number will increase as the company signed good distribution deals. Show less 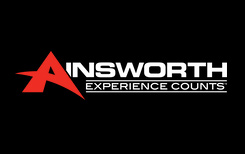