There aren’t much known about MrSlotty. It entered the market in 2016 and is based in Latvia. Being among the youngest developers, the company is quite successful. So far there are around 40 titles released and partnership deals reached with many recognized software suppliers.

Thanks to their deals with iSoftBet, EveryMatrix and other companies, MrSlotty was able to supply its software to variety of operators. iSoftbet platform alone is used by biggest names and offers games from more than 20 different suppliers. This platform is very popular with online operators, therefore, there’s an extensive list of MrSlotty casinos. Show more

EveryMatrix is another highly demanded platform allowing the developer to distribute its games to multiple operators. Another thing casinos might like is that best MrSlotty casinos accept Bitcoin deposits. Just few developers can offer this opportunity and there’s a separate category of operators supporting crypto currencies.

The content supplier specializes on video slots and for about a year it managed to release 40 games. That means more than 2 slots are produced every month on average. This speed is mainly due to the fact that their games are all identical. At least, that’s what you can feel when playing at reliable MrSlotty casinos.

It’s not clear what licenses or certificates the company has as there’s nothing said on their official website or elsewhere. You can just assume that their games should be fair because they are delivered through respected gaming platforms. When testing their games, it doesn’t feel like their random number generator (RNG) is biased. You yourself can load MrSlotty video slots and test them in practice mode. According to the company, they have seven RNG certifications but it’s not clear what are they and if there’s any proof.

The main advantage of their games is that they are very lightweight and therefore load instantly. Designs aren’t bad, however, not as appealing as top developers offer. Usually, their beauty is in nice, carefully designed backgrounds. Basically, slots look quite simplistic and some of them are completely uninteresting like, for example, Unicorn Gems – the slot which has nothing to offer. Only unicorn fans will probably like it.

Visit one of reliable MrSlotty casinos, and you’ll understand that this software provider will have to work extremely hard to get recognition. For now it just tries to pick some unconventional themes to draw players’ attention. One of their slots with unique theme is Meme Faces. It has original theme, but standard gameplay. For some people it might seem very funny and original, while others would find it ugly and unattractive. One thing is true about this slot – its design is not similar to any other video slot.

Generally, all MrSlotty creations have 25 paylines, 5×3 reel sets, wilds and free spins round. For three scatters punters are awarded just 1 free game, while 4 and 5 scatter symbols trigger 3 and 10 free spins respectively. This can’t be called a generous offer as most of the content suppliers offer many more bonus spins and additional features during them.

Paytables aren’t impressive as well. There are usually seven regular symbols and highest paying one gives you maximum 1,000 credits. Despite the developer says their math models are entertaining, in reality it doesn’t feel that way. You usually get small payouts and not that frequently as you could expect.

Best MrSlotty casinos can offer all games released by this developer as EveryMatrix agreed to integrate full portfolio of MrSlotty games. It’s about 40 slot titles. However, you’ll have the feeling that you play the same slots even though the names are different. As we’ve already mentioned, gameplay is identical and only designs change. So, you can play a couple of their slots to learn what kind of products they offer.

After each win, punters are given the opportunity to activate Gamble feature and double or quadruple amount of money received. The developer decided to use traditional risk game with the goal of guessing card color or suit. Once you enter risk game, you can play several rounds. However, if you initially chose to guess color of the card, you can’t opt for guessing card suit the next round.

Auto play mode is also available to gamblers. There are two types of settings: number of spins and how fast reels will spin. You can choose from 5 to 30 auto spins.

The list of MrSlotty casinos will keep extending as this content supplier delivers simple, fast loading games with some unique themes. Some players do like their unconventional designs and simplicity. Being different from others today is an advantage even if the quality of your products is quite low.  Show less 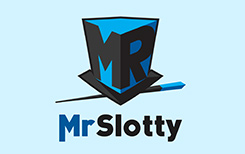