For those companies which aren’t too big, it’s wise to enter less competitive markets first and then expand further. That was the strategy successfully implemented by Habanero. For players in Europe it’s a relatively new name because the developer has just begun its European expansion after succeeding on Asian market.

It’s not a new iGaming participant even though just few people know it. Habanero has been working since 2010 to build gaming platform which offers around 100 games. The company enjoys steep revenue growth indicating that their products are well received by players and are highly demanded. It’s believed to be one of the most powerful and recognized casino software developers in Asia. Show more

Recently, the company signed several deals which would help deliver its content to European audience. One of them is with iSoftBet. This is a great opportunity to extend the list of Habanero casinos and reach for huge number of players.

Eastern Europe is also targeted by this company, and partnering with Slotegrator was a strategic move to get access to this market. The company doesn’t expect immediate positive results. It allows East and West European players time to test, like and spread the word about their software which would then result in greater number of reliable Habanero casinos.

Since the company targets European players, it actively licenses its games with different jurisdictions such as UK, Malta and others to legally access these markets. That means every game delivered through best Habanero casinos is fair. If you don’t trust unfamiliar names and therefore feel suspicious about this content supplier, think of their partners. You probably know iSoftBet; it reached the deal with Habanero and therefore acts like a guarantee of game fairness.

Habanero develops HTML5 games. As of today, there are more than 70 video slots, 10 video poker and 11 table games, but their portfolio keeps growing. Usually new slots are released every one or two months. It’s obvious that the developer prefers card games to other table games as there’s only one roulette compared to several versions of blackjack and poker.

They have interesting video poker selection. Some video poker slots allow players to play up to 100 hands at the same time. At reliable Habanero casinos video poker enthusiasts will have wild cards, bonuses and even gamble feature. That’s quite unusual decision, but players would love it. Generally, this type of games has simple design and basic animation, and the developer followed this tradition.

Because the supplier used to target Asian market for a long time, it has produced and keeps producing lots of Asian themed titles. You can feel it right away by just looking through their selection on a website from the list of Habanero casinos. There are fish, believed to bring good luck, Chinese emperors, symbols, etc. With time their designs become more aggressive and appealing.

But there are also a lot of other themes this company uses, and as the company enters European market we can expect their selection of themes will become more universal. Bird of Thunder is one of the latest releases and it shows better, more interactive Habanero. Most of their previous releases are quite a disappointment. You look at the picture and expect something grandiose; however, when a game is loaded you feel misled. But things are different with Bird of Thunder. This is a beautiful title and it feels great. Playing this video slot and comparing it to older releases will help you notice the developer’s intention to improve.

Typically, the supplier offers 5×3 reel set and standard range of features and special symbols. You can gamble your winnings in every slot and trigger bonus spins. Some titles offer random wilds, expanding symbols, both ways payouts and other extra winning opportunities. But that’s not very common.

It’s possible to win quite solid amount at best Habanero casinos as the developer offers growing jackpots in almost all of its games. Jackpots can be hit randomly any time. There are four jackpots: Grand, Major, Minor and Mini. These aren’t multi-million networks, their prize pools generally vary from several hundred to several thousand Euros.

When using Auto play, gamers can choose to stop the mode if balance drops lower than they want or if a single spin win is more than player specifies.

Overall, Habanero is a good casino content provider. It already succeeded in Asia despite supplying not the most engaging games. This success means they have nice chances of being recognized in Europe as well. Good thing about this developer is that their games become more entertaining as they get more experience. Show less 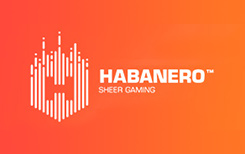