iGaming industry is so attractive that more companies around the globe constantly try to join it. One of the options is to become a content supplier. This is what iGaming2go founders have chosen back in 2007. You have probably seen many European developers, but Slovakia isn’t the home for many of them. However, iGaming2go production takes place at their office in Slovakia.

iGaming2go is one of the names just few gamblers know. For a decade this company had been trying to get recognized. But it seems that their efforts didn’t pay off that well. There are still not many gaming websites on the list of iGaming2go casinos and online players don’t know their games. That probably isn’t just a bad luck or bad marketing. If you visit reliable iGaming2go casinos and some of their creations, you can see their slots aren’t as exciting or beautiful. And chances are there’s simply no demand for their products. Show more

Back in 2007 their focus was mobile gaming. At that time not every developer offered cross platform games and delivering slots playable on mobile devices was an advantage. But today it’s not an option, but requirement. Therefore, almost all suppliers release games available to mobile users as well.

iGaming2go was one of the first HTML5 adopters and got a nice advantage because a lot of developers back then kept using Flash. With HTML5 games there was no more need to use additional applications to play casino games. Gamers could just load slots in their mobile browsers.

The company has its Random Number Generator tested and certified by independent laboratory. However, it’s not stated which laboratory does the tests. That’s not the most pleasant news to know, but so far there were no reports of their games being biased. So, you can assume that it’s safe to play their games at best iGaming2go casinos.

The collection of games doesn’t consist of hundreds of titles despite the fact that the company has a 10 year experience. There are around 15 slot machines. Even though the company today is not at the forefront of the iGaming content development, there are some interesting solutions it has introduced. One of them is the opportunity to turn off Gamble feature. Load any game released by the company and available at reliable iGaming2go casinos and open Settings to turn on/off sounds and/or Gamble option. This is a small, but very important option because sometimes it’s just too annoying when a slot offers to double the winnings after each successful round.

Overall quality of the games isn’t high. iGaming2go isn’t able to compete against many other big or small developers. However, their slots aren’t the most badly designed and uninteresting. If you aren’t too picky about graphics and animation, there’s a chance you are going to like those slots. But there’s another problem. Many of the games don’t pay frequently. So, punters have to be ok with lower than medium quality visuals and with quite long dry sessions.

Generally, their slot machines have 5×3 reel set and a small number of paylines. Some games have free spins while others don’t. For example, Cast Away offers players a bonus round, but it’s not a round of free games. Three scatters trigger pick-and-click round. Cast Away is a very simple video slot available at all best iGaming2go casinos.

Deep Sea is a game which pays both ways. It has just nine paying lines and therefore winnings are quite rare. Unlike many other video slots, Deep Sea doesn’t require three scatters to trigger bonus game, you just need one medusa and one golden coin. Bonus round looks pretty odd. Medusa, which is a wild symbol, will move to replace other symbols and then will go away. Scatters in this game pay in any position, but there won’t be free spins given for three or more of them.

Another slot you might be interested in is Elly’en. The story line of this game is quite intriguing. There’s a young, fearless lady and she fights aliens. Interesting thing about this title is that its scatter is a wild symbol at the same time. Young lady, accompanied with three different aliens, will reward players with quite high payouts. In this slot you won’t be able to change the number of reels. There are ten of them, and they are fixed all the time.

Fruits on Fire is probably the most popular title in their portfolio as there are two versions of this game. It looks and feels pretty good. Design is clean and clear, pays aren’t rare. Both versions are the same, but Fruits on Fire 2 additionally has bonus symbols which trigger a feature round. During this round players need to reveal identical prizes to collect bonus credits.

Even though there aren’t many operators on the list of iGaming2go casinos, there are decent websites which offer their games. Show less 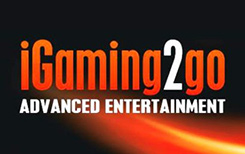