Despite fierce competition, some iGaming suppliers don’t feel necessary to work fast. They choose to be extremely slow and manage to survive and sometimes even thrive.NoLimit City is over a decade old, but you’ll be stunned to know they have only got seven games to offer. Our best guess is they don’t have enough people to speed up as there are so many open positions in this company.

NoLimit City does provide other iGaming solutions along with games, but still they are very slow in this fast pacing environment. It’s interesting that the company has released its first game in June 2015. Before they could design a single slot machine, NoLimit City staff had to build a platform to host their own games and be independent from other platform developers. So, basically, the audience got the chance to hear about this supplier just a couple of years ago. Show more

The company isn’t popular, but can be found at some pretty well-known casinos. The main goal of NoLimit City is to keep their employees happy when they are at the workplace. It seems like they are creating relaxed, warm atmosphere to boost loyalty and creativity. Putting their employees first while others focus on their customers is a quite unusual strategy, but it seems like it works just fine. The company doesn’t look like being on the brink of bankruptcy. Moreover, it signs more and more distribution deals and partners with many new operators.

Before NoLimit City signed deal with QTech Games, it used to focus on European market. But this deal has opened the doors to Asian markets. Later the supplier has reached another agreement to roll out their games in Asia. This time it was Flow Gaming, a powerful iGaming company in that part of the world.

The ease with which NoLimit City strikes deals with operators and distributors makes us believe that their games can’t be unfair. The reason to believe so is the number of big iGaming websites offering NoLimit City games. These respected operators wouldn’t risk their reputation by providing questionable software. So, even though there are no certificates of trust published on the developer’s website, we can assume it’s safe to play their games.

The provider is registered in Sweden and licensed by Malta Gaming Authority. This should be another factor to consider when guessing the level of the supplier’s integrity.

If anyone values quality over quantity, it’s NoLimit City. For 10 years they released 7 titles. We must admit that their games are excellent, and players would probably regret having limited selection of their games. Despite building traditional 5×3 set slots, the developer has managed to finds its own unique style. It isn’t aggressive or tranquil; it’s just beautiful and fun.

Normally, each title has two types of wilds, one is appearing in the main game and another shows up only during bonus rounds. There are also two or three bonus games. NoLimit City’s video slots are usually feature-packed and visually very appealing.

For those, who love to sit back and just see the action going on, there’s an Autoplay feature with multiple settings. You can have the feature deactivated when you have less than 75%, 50% or 25% of your initial balance. In case you have a winning streak, you can choose to stop the feature when you get x1.5, x2 or x5 winnings. Or you can always just set the number of rounds to play.

Out of all NoLimit City games three are lottery and card games and the rest are video slots: Sushi Mania, Oktoberfest, Space Arcade and Creepy Carnival. The latter was the first game produced back in 2015. However, it isn’t less immersive than latest releases. If you play all four of the titles, you can see consistent quality and style, and that is a good sign.

Lottery games looks quite sophisticated while cards quite simplistic. These categories of NoLimit City’s creations are definitely less appealing than video slots. But it’s nice to have more or less diverse selection. Show less 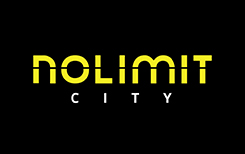