Entertainment is sometimes all about solid number of choices. Even lower quality products/services would do if you got tired of the same options being offered to you again and again.

Premium iGaming suppliers often release one slot a month or every two weeks. That’s not always fast enough to satisfy demands of active players, and as a result, they might try games produced by less popular developers. One of such developers is Multislot. Show more

With a handful of games, Multislot can hardly be compared to major iGaming suppliers, however, the company does its best in effectively using limited resources. The range of products and services is growing over time, and the supplier is trying to introduce valuable and unique products for online casinos.

The main focus of Multislot isn’t traditional iGaming, but mobile and social gaming. Every game released by the company is available on Facebook. That’s a good way for Multislot to get an edge in this competitive industry. To make social gaming more thrilling, the company tools enable operators to organize tournaments and variety of achievements.

Multislot promises the same quality whether you play on a mobile device or on a computer. They produce applications for Android and iOS users.

To make sure games are fair, special laboratories test the Random Number Generator (RNG). This element is responsible for generating unbiased game results. Gaming Labs has excellent reputation and has tested multiple RNGs of many famous developers. Multislot invited this respected lab to do the tests and got Certificate of Integrity, meaning that Multislot games are fair.

The provider is the owner of UKGC license and that should be another reason to trust their games. So, even though creations released by Multislot don’t look premium, you can play without being afraid of fraud.

It isn’t usually emphasized when talking about Multislot, but they actually produce solutions for land based casinos. These are cabinets which can be connected into a network. Gamers won’t necessarily need cash to play as there are cashless systems allowing the use of cards, tickets and accounts.

It would be impossible to build a casino solely on Multislot platform. There is just insufficient number of entertainments it can offer, although the variety of selection is reasonable. Around 20 slots, 6 video poker titles, and four card games, this is far from current casino standards. Therefore, look for iGaming websites utilizing variety of platforms if you need Multislot titles.

Card games have nice visuals and sounds. They are relaxing and pleasant. Players can change colors, audio volume, pace of the game and some other options. Great thing about their blackjack is that it asks if you really want to hit a hand if you’ve got more than 17. This precaution is very useful for players who often push buttons by mistake. Basically, this category of Multislot creations looks much more competitive than slots.

If you love feature packed video slots, that won’t be the supplier of your choice. But if you love free spins and maximum of 20 spins is too few for you, check Multislot titles. Typically, these slot machines offer 50 or more free games for 5 scatter symbols. Considering most of the time the limit is 20-30 spins per bonus round, that’s a generous offer.

Visually video slots much less appealing than those produced by major iGaming supplier. When comparing the quality, it becomes obvious that the company has quite limited resources. iGaming software producers don’t normally choose to create cheaper graphics unless they are forced to. But due to cute characters and interesting themes, slots don’t look too cheap and playing is nevertheless entertaining.

Multislot’s choice of themes is good. Get ready to embark on different adventures. You can try to find diamonds or treasures of lost ruins, meet goblins, mermaids and even chess players. To pay respect to the Asian Themed trend, the supplier released Matsuri slot.

Even though these aren’t premium quality creations, many players would enjoy them. Those are players who prefer simple, bright designs, minimum features and maximum number of free spins. Show less 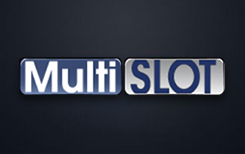