Egypt is one of a few mega popular themes that are often used by slot developers. Who would resist exploring this amazing, full of secrets and treasures world? It’s much like traveling back in time to pyramids, pharaohs, tombs and so many other exciting ancient Egypt staff. Studios just love using this theme.

There are lots of similarly themed video slots. If you want to see all of them, just visit any decent casino site and enter Egypt, Tut or Pharaoh in a search bar. There will be plenty of titles to try. You can look through our Casino Rating to choose a gambling site.

Egyptian themed online slots can be found on our website as well. Just use search bar at the top of the page and enter Egypt, Tut or Pharaoh. Another option is to open All Free Slots page and see what choices are available.

This is one of the most popular slots in general, and players love it not for its Egyptian theme, but for its colossal progressive jackpot that once in a few months turns one or two Microgaming casino players into millionaires. Mega Moolah Mega jackpot is shared by several Microgaming slots, including Mega Moolah Isis. 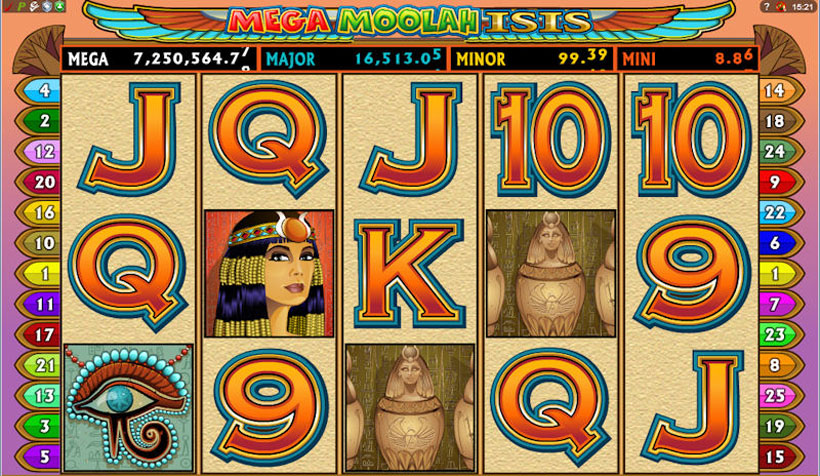 Basically, there’s nothing innovative about this slot machine. It has very simple graphics, free spins with up to x6 multiplier and a Gamble feature. But Mega Moolah Isis has four tier progressive jackpot with Mega being the largest one. It always pays over a million, with the record win at the moment being 18.9 million Euros.

After being available exclusively on a few gambling sites the slot was released for all NetEnt casinos in 2018. Overall, this is a very nice slot machine that has beautiful graphics and some interesting features. One of the key features that make Coins of Egypt stand out is Pharaoh Coin Win. Players get paid random amount of credits every time there are golden coins landing in the bottom right corner of the symbols. 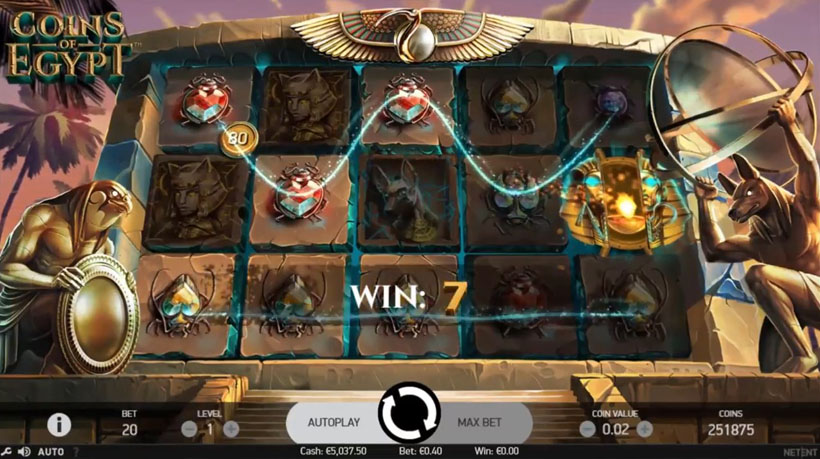 Another bonus feature is a round of free spins. Players get an unspecified number of free games that last until there are three special symbols collected on the reel five.

By releasing Tut’s Twister, Yggdrasil contributed a lot to a powerful portfolio of Egypt themed slots. This probably is the most exciting game out of similarly themed titles. Yggdrasil made a thrilling slot by adding much more action than developers usually do when using this theme.

Wait for two wilds landing at the same time to know what we are talking about. One of the wilds expands while the other turns into a twister that sucks up all the wilds and then throws them back randomly on the reels. In the meantime, players have a multiplier growing by 1 with every third wild symbol during this feature. 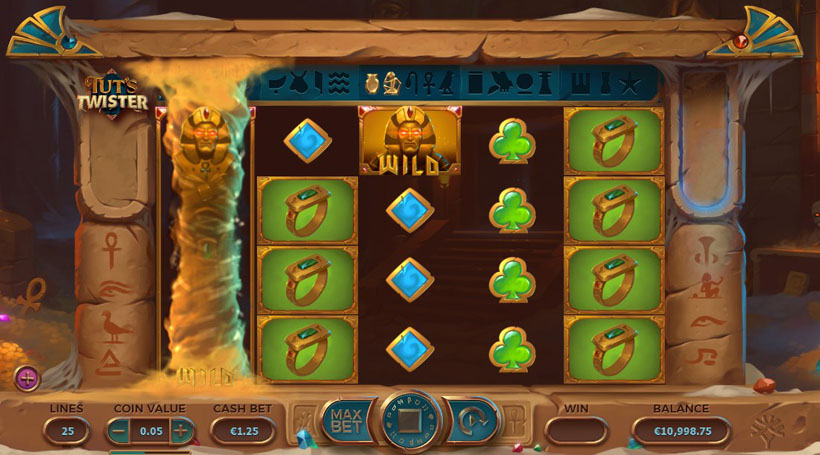 Tut’s Twister has another interesting thing to mention, it’s called Mystery Feature. A question mark appearing on the screen can trigger above mentioned Tut’s Twister bonus round or award extra wilds and bonus credits. The slot can be found at many Yggdrasil casinos. You can also play it for free on our website. No registration required, just follow this link.

This Play’n GO video slot has a very traditional Egyptian look. There are all classic symbols that you expect to see. The game offers a bonus round giving players from 3 to 20 free spins with multipliers. The number of free rounds is determined randomly by a fortune wheel. 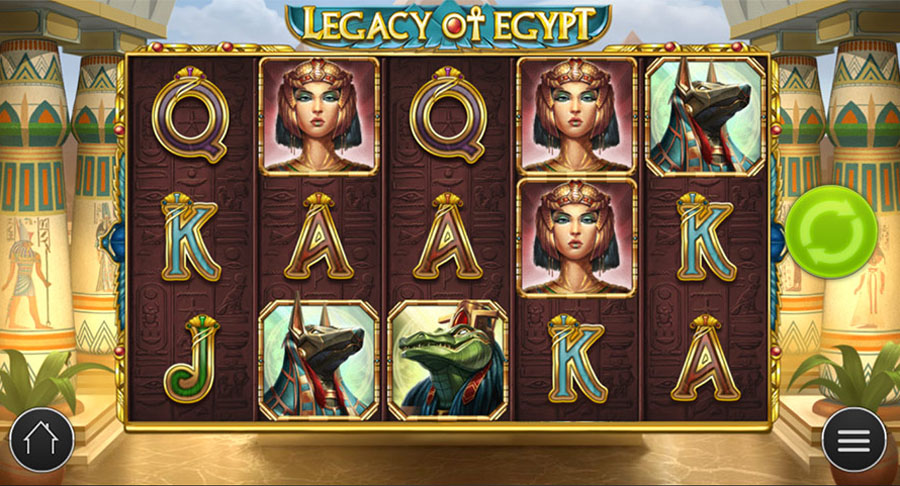 The game is developed by Habanero and is a new version of their original Egyptian Dreams. It’s a nice option for those who chase Egyptian treasures. Initially there are 243 ways to win, but the slot offers a round of free spins during which there will be two extra rows of symbols so that in the end you’ll have 3125 paylines. 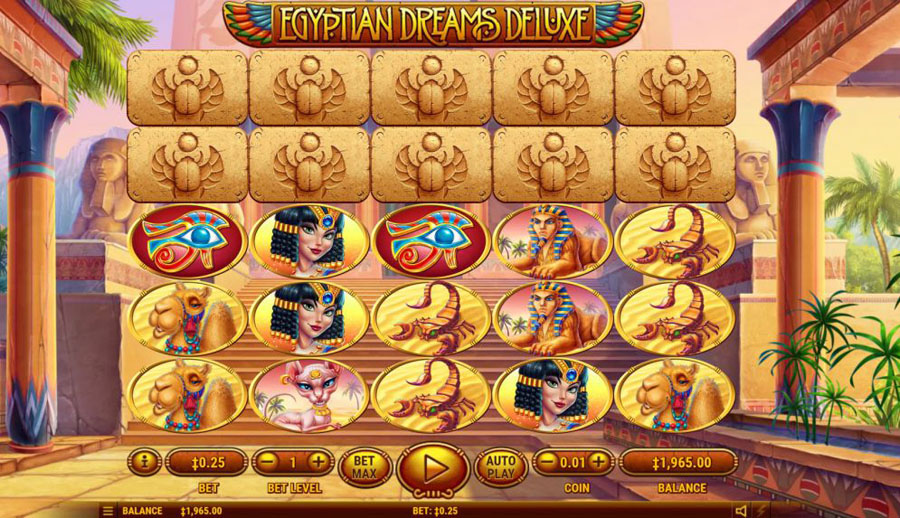 To activate free rounds, players need to land just two scatters. Moreover, when two of these symbols land, there will be a respin awarded that gives a chance of getting one more scatter and possibly bigger wins.

This is a pretty simple slot released by Pragmatic. There isn’t much interesting about Ancient Egypt. Wild symbol is a scatter at the same time; during a bonus game you’ll have one randomly selected expanding symbol; there will be various Egyptian treasures and gods on the reels. That’s probably it. 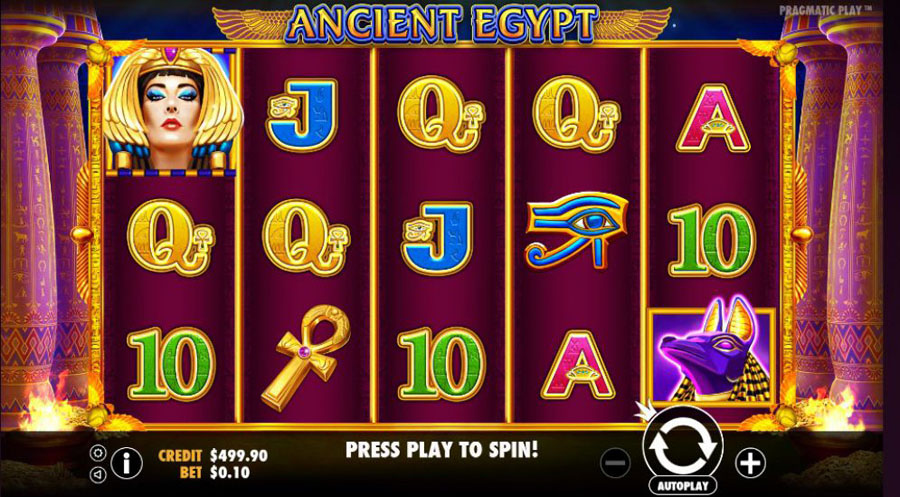 You can find ancient Egyptian treasures at Red Tiger Gaming casinos as well. The studio has Ancient Script online slot that offers Egyptian setting and one interesting feature called Expanding Tiles; that’s when a set of symbols expands to cover entire reels. During a bonus round Expanding Tiles feature gets activated after every winning combination. 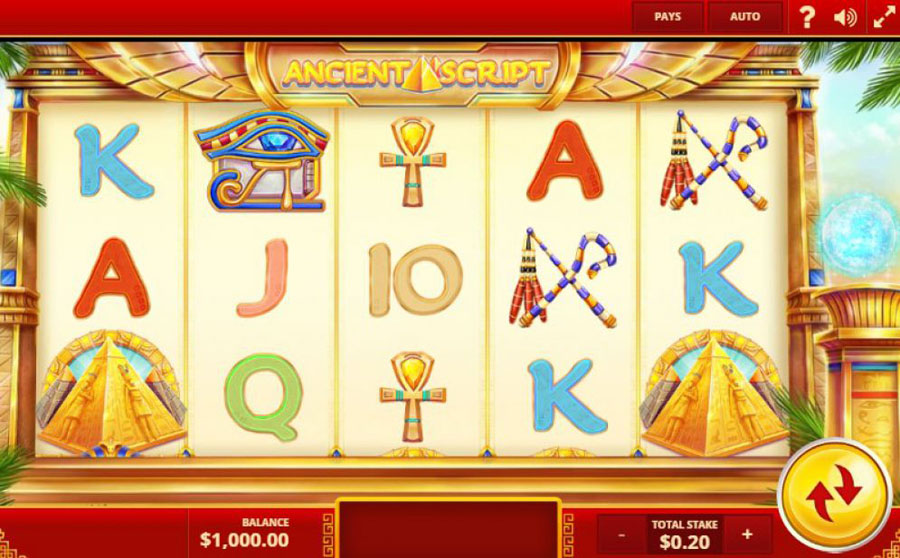 Book of Ra and Other Novomatic Slots

This developer has a special love for Egypt and has released a series of Egyptian themed casino slots. One of them is Book of Ra, the slot that has several other versions, including Deluxe, Magic, 6. There’s also Dynasty of Ra, Golden Ark, Pharaoh’s Ring, Queen Cleopatra. These aren’t some extraordinary games with superb graphics or unique features. But Novomatic slots in general are quite popular despite quite simplistic visuals and a standard free spins bonus round. 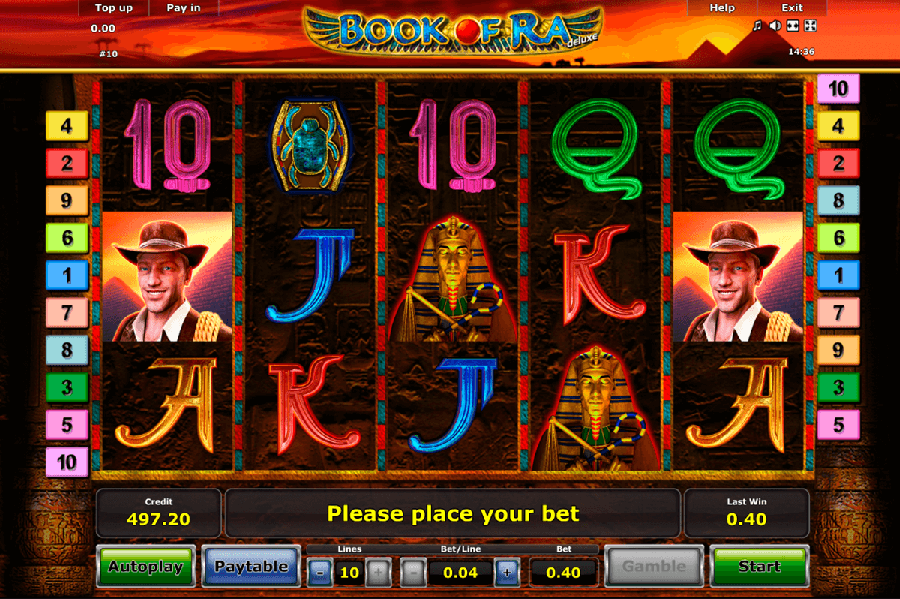