There are lots of popular slot themes such as leprechauns, gold, adventure, Egypt and dragons is one of them. These mythical creatures often get featured in casino slots as they can ensure spectacular visuals and powerful animation. You can see dozens of versions produced by various developers, there are golden dragons, lucky dragons, rock dragons and so on. Here we’ll discuss some of the best of them.

This is arguably the best dragon themed title. Despite being not so visually attractive, Dragon Born secured the place in the slot development history as the very first Megaways game. This slot mechanics, which proved to be extremely successful, urged content providers to innovate, changing the overall industry landscape. 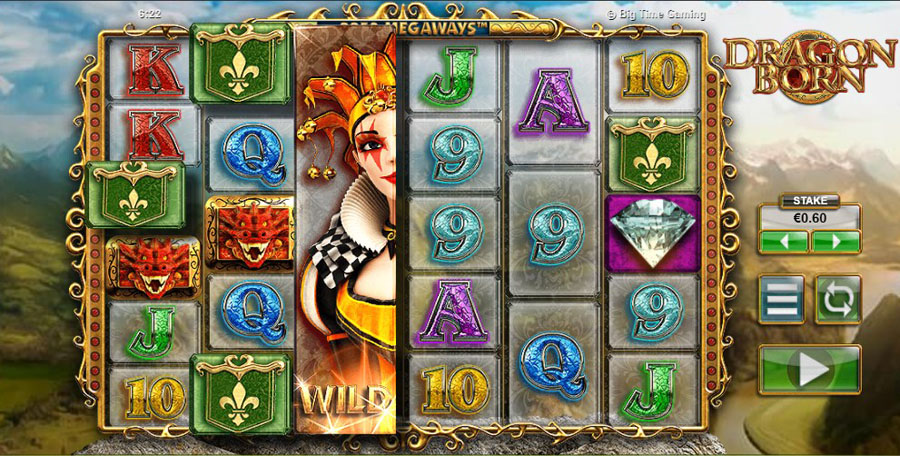 Dragon Born was released in 2016. Just like other Megaways games, it has random number of symbols, raging from 2 to 7, on each reel. The maximum number of ways to win is 117,649. Many slots built on the same mechanics offer feature buy option, but not this one. The only way free spins get triggered in this game is by collecting scatters.

In 2016 Yggdrasil released Double Dragons casino slot. Despite being relatively old, it still looks great. This is a beautifully designed game that features some interesting bonus features. One of them is called Dropdown Win, it’s when win combinations disappear and empty the space for other symbols allowing for multiple wins during a single spin. 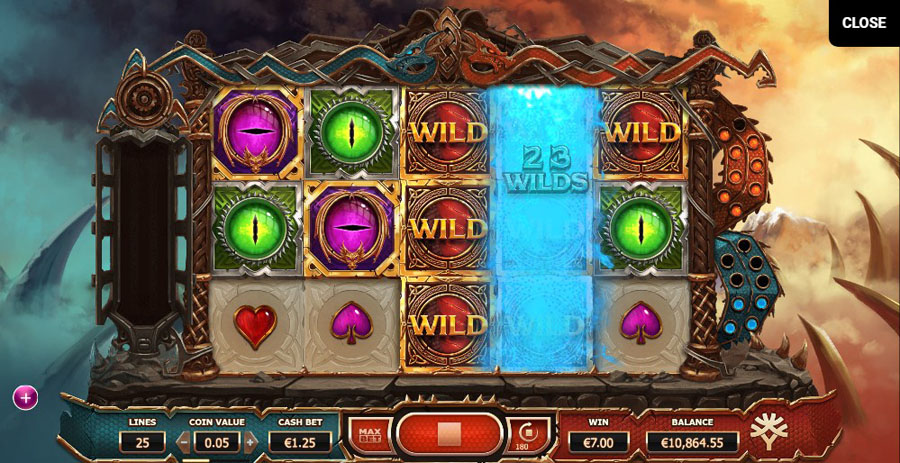 Second exciting feature gets triggered whenever there are four consecutive wins. That will result in getting two stacked wilds that can be as long as 28 symbols. 9 fire or ice dragon heads activate the corresponding round of free spins. On the right side of the screen there are two dragon head meters so you can keep track of how close to triggering the free spins you are.

Red Tiger studio loves producing dragon themed casino slots, and these are mostly Asian fire dragons. There are three of the similar titles they have: Dragon’s Eye, Dragon’s Luck and Dragon’s Luck Power Reels. The latter one is quite unique as it offers some interesting features. 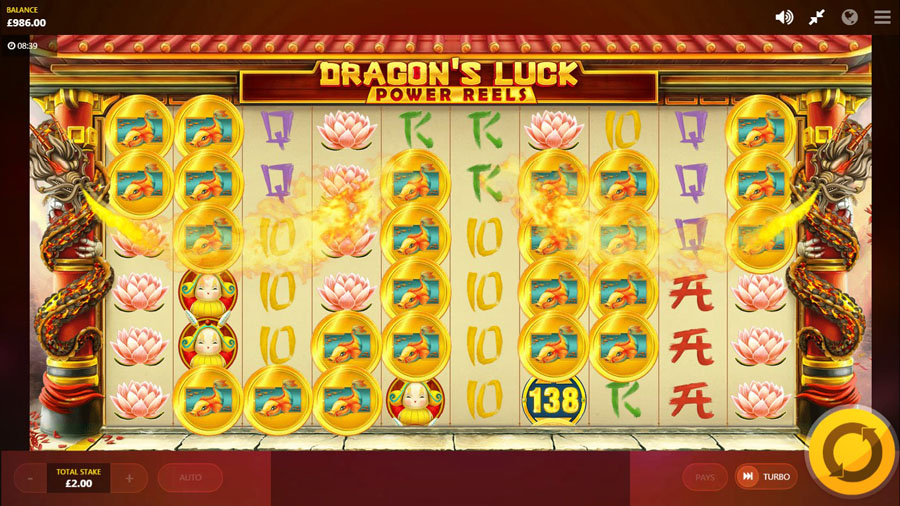 Dragon’s Lucky Power Reels was released in summer 2018. What’s unusual about it is that it has 10 reels. All win combinations pay left to right and any other direction as long as symbols form a line. Moreover, a single line can accommodate more than one winning combination. 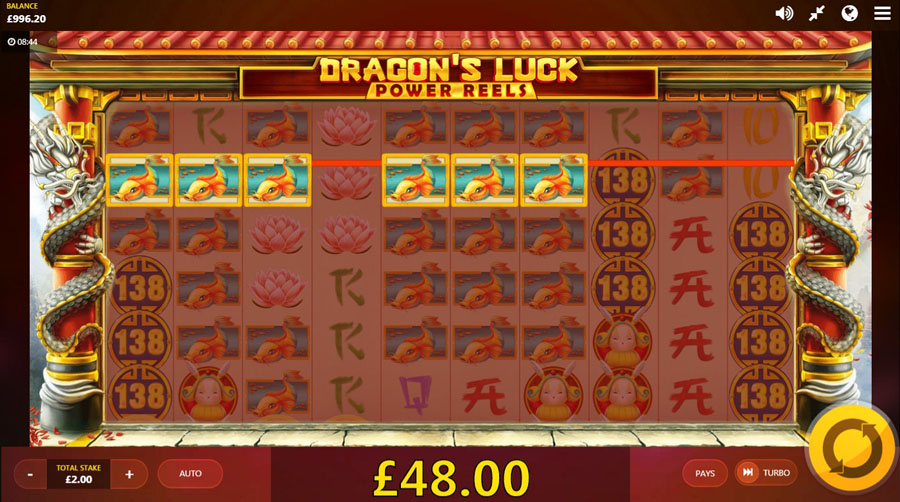 Just like in the original version of Dragon’s Luck, its Power Reel version has a dragon as a main character. Hidden behind it is a mystery symbol. The only feature to help players win, apart from mystery symbols, is mega sized dragon symbols. Other than that, there are no free spins, respins or multipliers. But the game is fun to play anyway. Players at least would want to try it in demo mode. Original Dragon’s Luck slot is very simple. It has five reels, ten paylines and mystery and mega symbols. 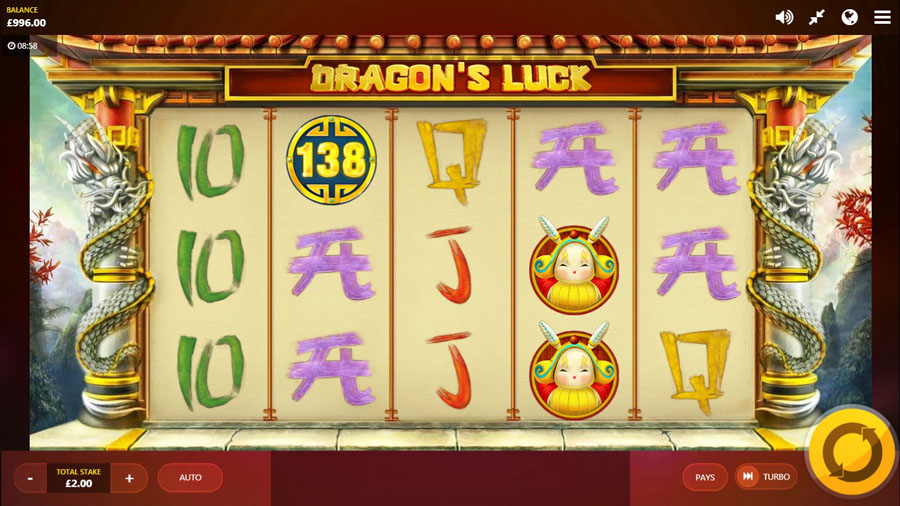 Dragon’s Fire looks a bit like Yggdrasil’s Double Dragons mentioned above. It was released in August 2018, features vibrant visuals and offers a 10,000x maximum payout. During free spins players can get up to a 50x multiplier that can land them some pretty big wins. In the main game dragons can randomly turn a couple of reels into wild or activate free spins. 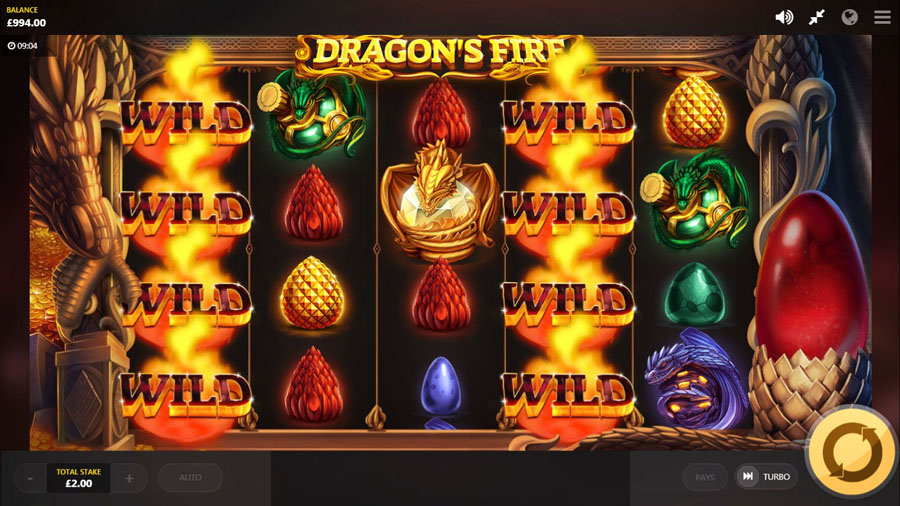 Dragons can be different – there are fearsome prehistoric beasts that breathe fire and ready to destroy anything, but at the same time they can be pictured as cute little creatures that can make friends with humans. This is a baby dragons themed casino slot that can be found at Genesis Gaming casinos. Don’t expect too much from it both in terms of visuals and features. There are just basic features such as wilds, up to 26 free spins and expanding symbols.

There are many more similarly themed titles. Rabcat, for instance, has Dragon’s Myth, which is another nice option. It tells the story of a brave teenage girl who is on a mission to tame dragons. NextGen offers another slot, A Dragon Story, while Play’n GO portfolio has a fun game called Prissy Princess where a dragon competes with knights to win a princess’ heart.

Dragons are very popular and therefore, games featuring them can be found on almost any gaming site. You can also play well over 1,000 free slots right here on Affgambler, and at least a couple of dozens of them feature these beasts. Just visit All Free Slots page and enter a slot title or the word “Dragon” to see available choices.