History of Slot Machines. Who and When Invented First Slots?

Unlike other industries, the birth of slot machines isn’t very well documented. That lack of facts leaves some space for different versions of how the history of slot machines began and who invented these iconic casino games. Some think that first slots were created by Charles Fey. Even though it’s widely believed so, this opinion can be a little bit inaccurate.

According to one version, first slot machines were developed by a New York company called Sittman and Pitt in 1891. If this company really was behind this incredible gambling invention, it would be a mistake to picture first casino slots as three reeled machines.

Sittman and Pitt created five reel slots. That’s because those were poker machines and like in poker, players had to get five cards. It was similar to playing poker game, but you don’t compete against other players and just hope to collect a pair of kings or a higher combination. KK was the lowest paying combination.

There are 52 playing cards in a regular deck. Slot reels each could accommodate only 10 cards. Therefore, Sittman and Pitt’s machines were missing two cards – J and 10. That resulted in a lower payout ratio.

One of the key characteristics of those poker machines was that payouts weren’t automated. Players had to ask for a venue owner or employee to collect their winnings. It wasn’t just money they could win, but also variety of products like chewing gums, drinks, etc.

For instance, one of the first slot machines had maximum payout of 100 cigars paid to anyone collecting Royal Flush. Wager size was fixed at that time – 5 cents per spin. Those slots were usually placed in bars to attract more visitors as poker was very popular.

This version doesn’t provide specific dates. It’s believed that Charles Fey created his first slot machines somewhere between 1887-1895. But many think that his invention came as a modification of Sittman and Pitt’s poker machines. If they are right, Charles Fey’s product was created in 1891-1895.

Charles Fey introduced automated payouts, and this was a big deal at that time. To make this happen, he had to make the slot as simple as possible. That was the beginning of the three reeled slots era. Along with three reels and automated payouts, he introduced a few symbols instead of fifty different cards. There were just three playing card suits (hearts, diamonds and spades), horseshoes and Liberty Bell. The latter symbol was the most valuable, and slots were named after it. Those changes made a huge impact and greatly influenced the history of slot machines. 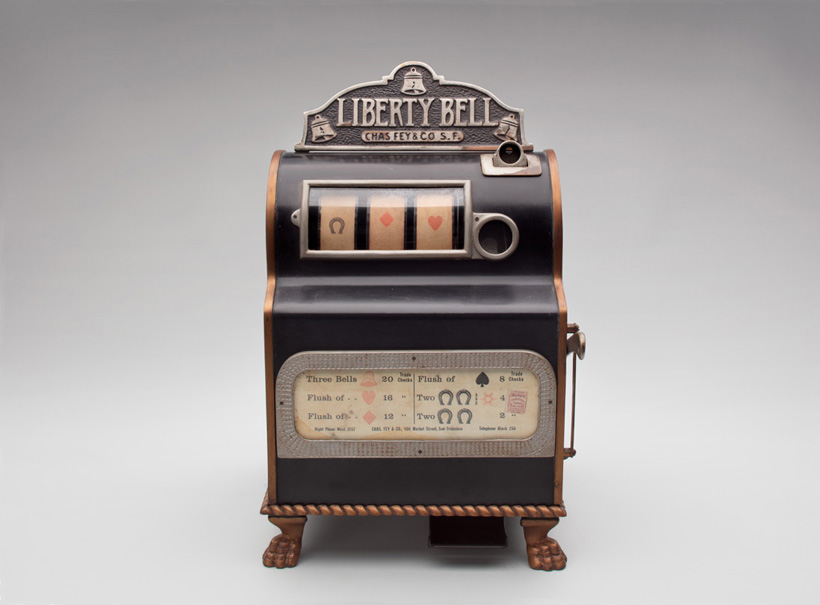 After Charles Fey came up with simple and his innovative machines, a lot of investors rushed in and started investing in this industry. Fey failed to patent his invention and therefore others started to copy his work. As Charles Fey lived in the USA, there’s no doubt about the country of origin of the first slot machines. But naming the author is a bit tricky.

Charles worked as a mechanic and had passion for inventing. Some say that he first had the idea of creating a slot machine as early as 1887. That’s several years before Sittman and Pitt introduced their own product. However, we don’t know when this company came up with the idea, and when they started to actually started building the machine. So, there is no exact answer to the question of who is the author. But one thing is clear – Charles Fey indeed can be called Father of Slots, at least for his contribution to the development of the industry. It’s clear that his work gave the slot production a huge boost.

In 1906 one of Mills Novelty employees established Industry Novelty company. At first they specialized on fixing existing slot machines, but later launched their own production. One of their most significant contributions to the history of slot machines was figuring out how machines could recognize coin values. They also invented the mechanism that prevented coins from being stuck inside the slots if they were released too quickly.

Many companies jumped the trend at that early days of slot machines, but most of them ceased to exist. One of the first slot machine developers that still operate today is Aristocrat. The company was established in 1953 and distributed its products globally. Its founder, Len Ainsworth, later lost control over his company and left it. He then started a new company, Ainsworth Game Technology.

One of the earliest names given to slots was “nickel-in-the-slot”. That’s because machines accepted only 5 cent coins. Later this long name was shortened to “slot”. At the same time, machines were called one handed bandits, and there was a good reason for that. When fruit symbols were introduced, players started calling slots “fruit machines”.