After NetEnt has converted its iconic Dead or Alive slot machine, gambling community became suspicious of some changes being made to the game. The developer denied any changes, but players keep making similar claims. And we aren’t talking about recreational players who just had a couple losing spins. We are talking about experienced players that collect a lot of data.

As developers convert their games to HTML5, some players raise concerns that studios could use this opportunity to secretly make some changes to the games. Indeed, games don’t always stay 100% the same after the conversion. Slots become slower or lack some minor options. But in case of Dead or Alive, it’s variance that bothers some players. They think that HTML5 version of the title has lower variance, meaning that it pays more frequently and there are less massive wins.

Dead or Alive is a very high variance slot machine. It used to award mostly small payouts, but once in a while players could collect monster wins. Considering many casino customers love this slot for rare but huge wins, we can expect them to be unhappy about possible changes. Slot’s high variance is the reason some operators restricted customers from playing the game when wagering bonuses. One monster win can make sure player will easily clear and withdraw bonus money.

Some players have contacted NetEnt regarding this issue, but the company dismissed these claims and insisted no changes have been made. That’s quite interesting, because players have collected lots of data. They have counted how many times the slot paid 1000x stake or more during bonus rounds.

Software suppliers aren’t required to provide RTP or variance information for games licensed in Curacao. Meanwhile, UKGC wants developers to display RTP, but the information about variance is optional. Unfortunately, there are other changes besides RTP that affect payouts but don’t require new audits even according to UKGC rules. And developers don’t even have to inform players of those changes.

It’s not surprising that punters don’t believe everything developers say, even if these are such renowned companies like NetEnt. Content suppliers are just too reluctant to provide more information about their games, and this lack of transparency results in distrust. 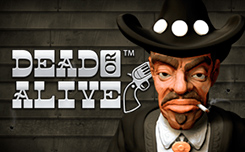 Imagine a picture of the Wild West at the turn of the twentieth century, and you get an accurate idea of the plot 9-line slot machine Dead Or Alive. And because the five slot machine reels spin at the background of the wardrobe, to change the number of strips you need to "remove" to nail the appropriate tag.

The theme of the game is disclosed in a set of characters, borrowed from American westerns. Boots, Lone Star, whiskey, cowboy hat and a gun are used for the formation of combinations. Several lower cost have five card denominations. A shortage of signs for chaining can make up Wanted ad.

NetEntSlots
To write a review, you must login or register