Fairy tales are casino developers’ favorites when it comes to choosing slot themes, and what can be more appealing than exciting Alice in Wonderland story. There are numerous Alice themed online slots and here we’ll list some of the most exciting of them.

Alice is the main character of the story, but there are plenty of other interesting characters to feature in slots. White rabbit, for instance, made appearance in one of the iconic Big Time Gaming Megaways online slots. It is responsible for some of the craziest wins thanks to its high volatility and high potential. Even though the slot doesn’t feature Alice herself, Wonderland and its inhabitants can’t be mistaken. 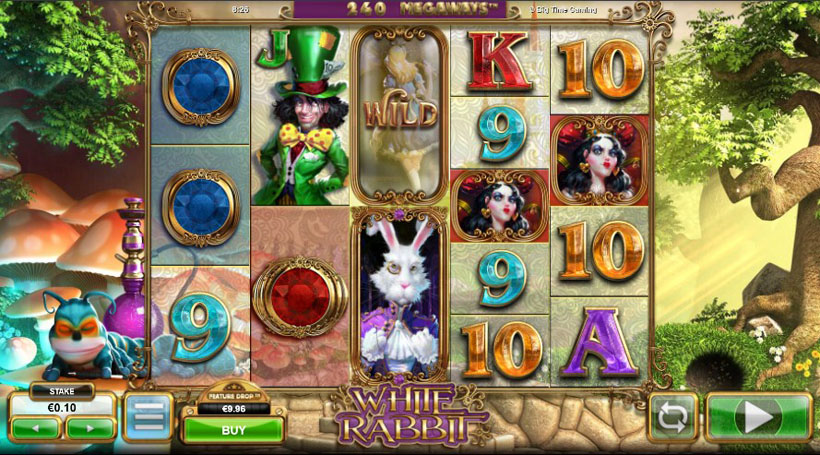 The fact that White Rabbit slot is produced by BTG speaks for itself as the company is renowned for its exciting, high quality slots. It’s a classic Megaways game meaning there’s a constantly changing number of ways to win as the number of symbols on each reel varies from 2 to 7 on every spin.

Great thing about White Rabbit slot is that players can buy bonus features triggering free spins at any time. They can also have an option to wait for a random activation of the feature. During free spins reels can expand and the maximum number of ways to win increases from initial 16,807 up to 248,832. This is definitely one of the best Alice in Wonderland themed online slots.

Microgaming is one of the latest developers joining Alice in Wonderland craze. But they offer something that makes their Absolootely Mad slot stand out. The game is connected to the famous Mega Moolah progressive jackpot that regularly turns lucky players into multi millionaires. Mega Moolah holds the world record for online casino biggest win with a bit over €18.9 paid to a lucky player in September 2018. 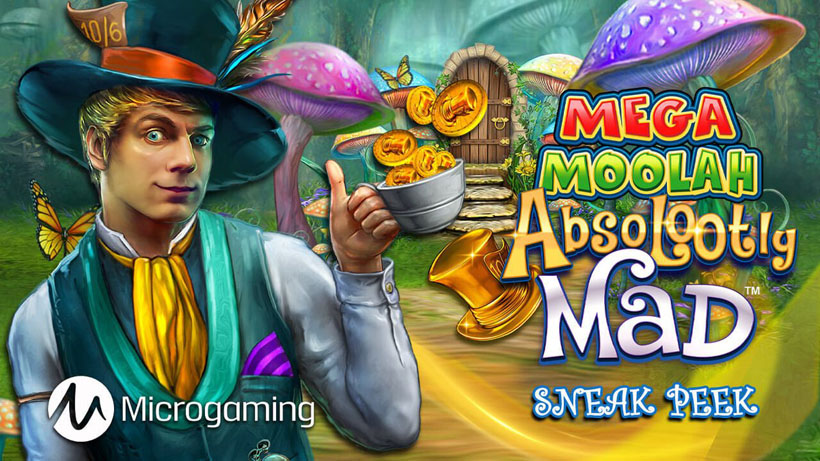 Absolootely Mad features another Alice in Wonderland prominent character, Mad Hatter. It’s a medium volatility game and apart from chasing a major jackpot, players can enjoy other features as well: a round of free spins, Rolling Reels and multipliers. It is produced by Triple Edge and is distributed exclusively to Microgaming online casinos.

Alice in Wonderslots by Playson

Unlike two of the above mentioned slots, Playson’s version of the legendary fairy tale is very simple. But this time it’s Alice that is featured in the slot. Available at Playson casinos, the game has nice, detailed graphics and will be appreciated by those who don’t fancy feature rich titles. 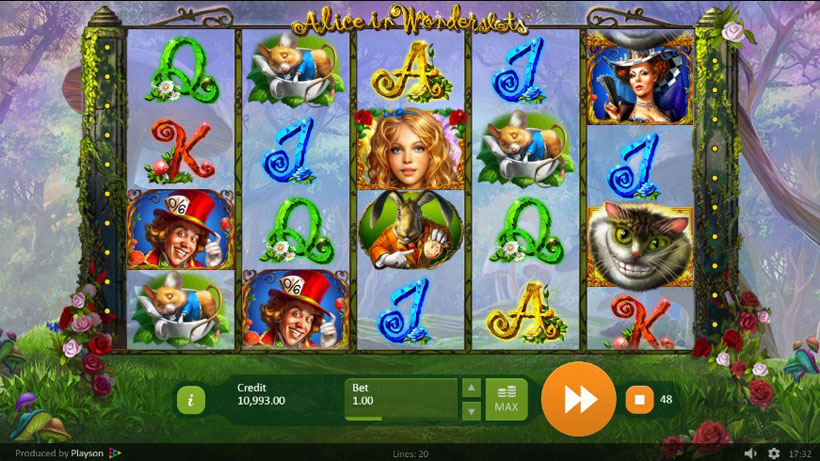 Apart from a regular round of free spins, Alice in Wonderslots offers just one extra feature. Alice as a slot symbol can expand to cover entire reel and it pays whenever there’s a pair of cells that doesn’t have to land on paylines.

Mad Hatter hosts another tea party in the version presented by Red Tiger. There’s nothing exceptional about this slot, but visuals are pretty good. The character design is borrowed from a 2010 movie Alice in Wonderland starring Johny Depp as a Mad Hatter. 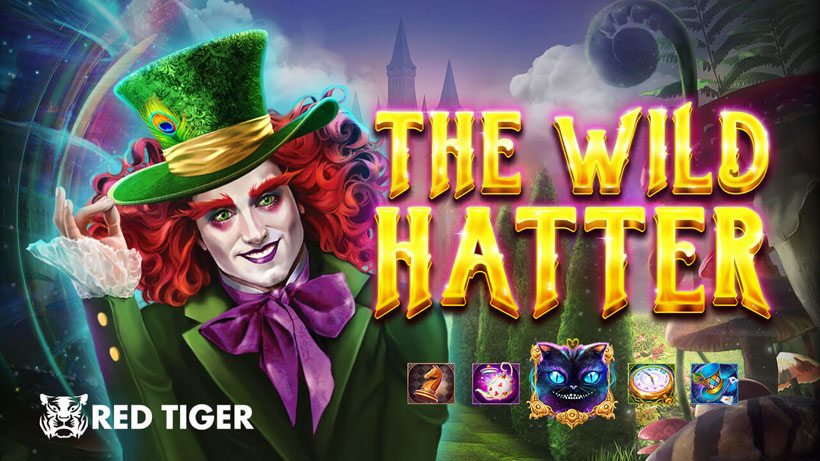 With respins being a key feature, they get activated quite frequently as a single wild symbols is enough for that. To add potential to the game, supplier decided to make a random type of symbol locked and introduced a multiplier and extra wilds into respins. Wild Hatter is a simple yet quite appealing slot.

Other Alice in Wonderland Themed Slots

There are some other titles worth mentioning. One of them is Alice and the Red Queen by 1x2gaming. This is probably one of the brightest versions with its cartoonish style and vibrant colors. There’s one interesting thing about this slot – the developer incorporated one poker feature. Players get paid extra credits for a flash poker hand. In the corners of each symbol you can see one of four playing card suits. When there’s a combination of five symbols on a line all having the same card suit, players get rewarded. 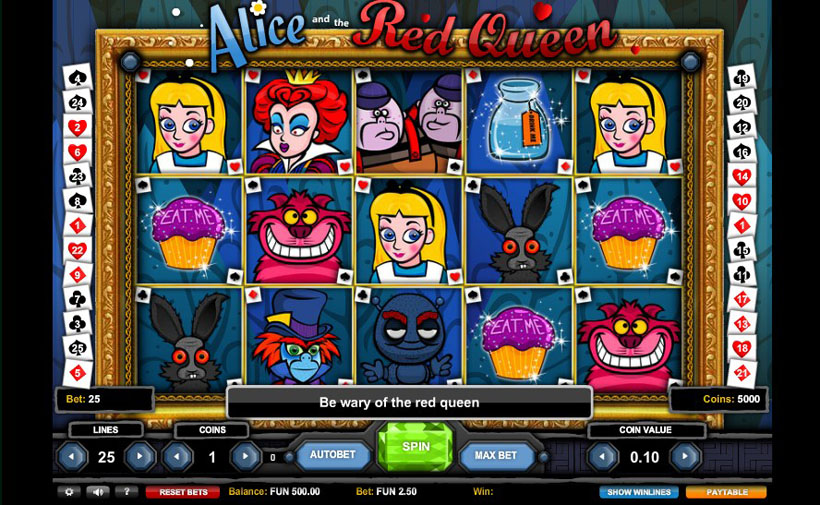 Adventures in Wonderland by Ash Gaming is a rather old slot machine, but still looks ok. Despite the title’s lack of visual appeal, it offers lots of features to enjoy plus a local progressive jackpot. Local jackpots mean that every casino will have different prize pool as money is collected within a single casino. It doesn’t turn players into millionaires but on average pays lucky winners around 200,000 Euros. 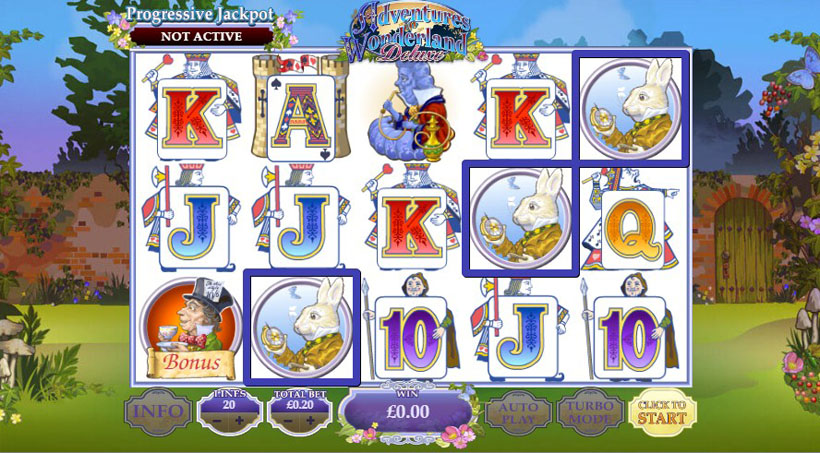 Adventures Beyond Wonderland by Ash Gaming. Seems like this developer gets inspired by Alice in Wonderland a lot. This is the second Alice themed slot machine produced by the studio. This time it’s a 243 ways to win mechanics they use, but as there can be up to three extra reels during free spins, the maximum number of ways to win increases up to 2,187. Players should also keep an eye on the caterpillar in the right side of the screen that blows bubbles to award variety of prizes. 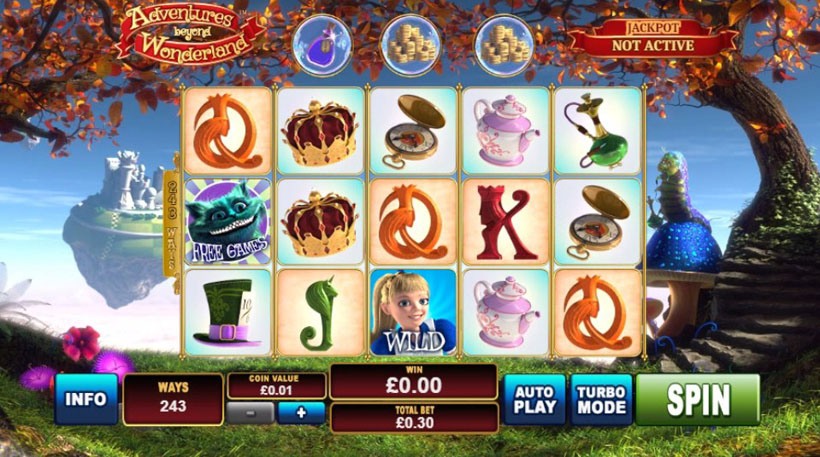 Alice Adventure by iSoftBet. It doesn’t offer fancy graphics, but looks very nice. As this isn’t one of their most popular titles, you can find the online slot at some iSoftBet casinos. The entire focus is on a round of free spins where Alice can expand and stick to the reels. In addition to that, players get better chances of winning big thanks to up to 5x wild multipliers and expanding wilds. 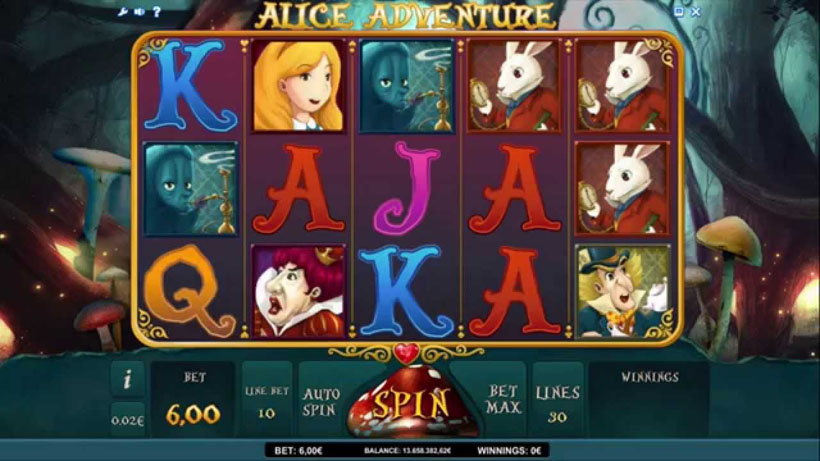 Big Time GamingMicrogamingRed Tiger GamingSlots
To write a review, you must login or register