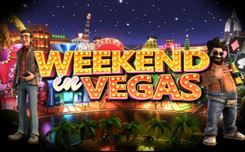 The Weekend in Vegas slot machine produced by Betsoft tells the story of three friends who went to Las Vegas to celebrate the stag party.

To ensure that the gaming machine matched the topic externally, the developers added to the drums icons of heroes, dancers, police cars and traditional card denominations.

Payment multipliers in the online slot Weekend in Vegas are found only within the Free Spins, where the earned amounts are paid with a coefficient of x2. The action of the function is terminated in parallel with the completion of the free spins package, after which the payments are accrued in the normal mode.

The second type of feature refers to another variant of the Pick Up bonus mode and presents the player one more chance to perform its activation by playing a repeated spin.

The Re-Spin function is activated if there are 2 full icons of the main characters on the reels of the slot, after which they are held in their positions.

Free Spins – If a company of merrymakers Weekend in Vegas stops a police patrol with a combination of some characters, the participant will receive the following sets of free spin: