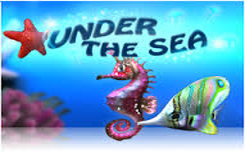 Slot Under the Sea, has five reels and 30 paylines. In the game there is a symbol with the image of the Mermaid and the symbols on which her friends are depicted.

Scatter symbol in the game is a picture with a sunken ship. Three, four or five character scatterers launch eight, twelve or fifteen free spins, respectively.

In addition, in the video slot Under the Sea there is a bonus symbol – this is the image of the chest. Three of these symbols begin a bonus game in which you will need to select the chests, thereby determining the amount of your winnings.

Video slot Under the Sea will be interesting not only to fans of the cartoon about the Little Mermaid, but also to all lovers of beautiful and interesting slot machines.