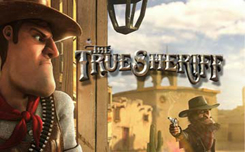 Playing in The True Sheriff, you will find yourself in the Wild West, in a city in which bandits keep all residents at bay and only the fearless sheriff can restore order and justice.

The game has five reels and 30 paylines. All the symbols have an excellent graphics, and if you get a winning combination, you can see a small clip, so the game becomes even more interesting.

At the moment of the appearance of the pistol on the middle drum, the sheriff will shoot up to five times, turning the random pictures into wild symbols that will replace the other images, and remain for the next spin.

Three, four or five sheriff stars on neighboring drums, starting with the left, launch 10, 12 or 15 free spins. Throughout the game, every star that appears on the screen can bring you an extra prize.

When a pistol appears on one of the horizontal lines, a bonus game begins on the additional screen between the sheriff and the bandit on adjacent drums. Here, you need to fight the leader of the bandits.

Video slot The True Sheriff is an exciting and interesting game, with great graphics and great bonus features.