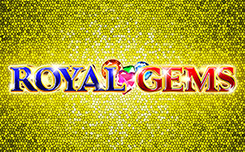 Bright brilliants, shiny diamonds and jewelry – what can speak more eloquently about wealth and luxury than these attributes? That’s why everyone likes video slots on the topic of wealth and expensive stones.

GameArt decided not to change the traditions of the genre and created an amazing gaming machine Royal Gems, based on standard rules, an interesting storyline and a beautiful brilliant interface.

The main game consists of 5 reels and 10 paylines. It’s very easy to play this game – the Spin and Autoplay buttons are the most important, they start their backs in normal or automatic mode. Per Line regulates the rate – from 0.01 to 0.50 per line as much as possible. In general, the management of the gameplay is standard for the user and does not cause difficulties.

The symbolism of the game is themed – the crown, the golden seven, the diamond star and a lot of precious stones. All symbols work, starting from three on the game line. The most generous is the symbol of the luxurious royal crown.

A special symbol in the Royal Gems is one – a five-pointed diamond star. It acts as a scatter and brings payouts regardless of the position on the field, the location of the game lines and other winning combinations. H

For particularly risky players, the creators introduced a well-known game for doubling. To start it, you need to press Gamble after any successful spin. On the screen, a closed card and two buttons – red and black. The task is to correctly guess the color of the closed card. A successful attempt to double profits, unsuccessful – annuls the last win.

Royal Gems – excellent in design and gameplay video slot with a nice interface and dynamic plot.