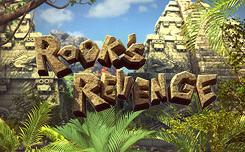 The developer of software for online casinos company Betsoft Gaming is different in that it always produces original slots with stunning graphics. The Rook’s Revenge was not an exception.

Slot Rook’s Revenge offers you to go in search of treasures to the pyramids of South America. There you will get to know a funny character called Rook. The gaming machine has some original features. Rook’s Revenge is a five-reel slot with 25 permanently active lines.

The originality of the Rook’s Revenge is that after the winning combination, the characters that created it explode, and new ones fall into their place. And if again a winning line is formed, then the payout will be paid with the coefficient x2, etc.

In the Rook’s Revenge slot there is a wild symbol – this is the image of the question mark in the circle. This symbol appears only on the second, third and fourth reels. It can replace other characters.

Also in the game there is a scatter symbol, a picture with a picture of a golden mask. The scatter symbol appears only on the first, second and third reels, three character scatterers start free spins. During these spins, the function will be active, as in the normal game, but the coefficients will be higher – x3, 6, x9 and x15.