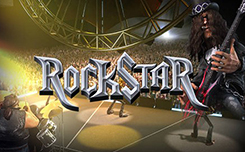 Rockstar is a clockwork slot game for rock fans, which has 5 reels and 30 paylines. Betsoft provided the game with quality graphics and turned the game area into a scene for a rock concert. In the role of game characters are the members of the rock band, their fans and all sorts of attributes.

If you collect three or more solo guitars on one active line, you will be offered a bonus round of “Epic Solo”. In this round, a guitarist like Slash will break out onto the stage and play a solo; As a result, three symbols will turn into cash prizes.

Gold and platinum disks act as wild symbols, which replace any other symbols. Any combination made with the help of a gold disc is valued doubly, and if instead of gold there is a platinum disk in it, you will get five times more. Both wild symbols on one active line increase the winnings by a factor of ten!

To play the bonus round “Are You Ready to Rock”, collect three tickets on the active line. You need to get in notes, earning reward points, which then turn into cash prizes.