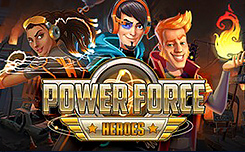 Slots Power force villains, is equipped with five reels and has 25 paylines. Starting the slot machine, you will see five insidious characters on the screen: strongman, firelord, technician, spy and clown, as well as denominations of cards from J to A.

Large symbols – Sometimes on the screen there are blocks of identical pictures, occupying immediately nine cells (3×3).

Mystery symbols – On any drum there are two “mysterious” images. Any element can appear in them, except bonus.

Wild – replaces simple pictures and creates combinations on its own.

Bonus – This symbol falls in three middle columns and launches the prize round Villains take over. It appears in the form of a block of nine pictures in the 3×3 scheme.

Villains take over free spins – In the cells of the block appear the inscriptions +1, +2 or +3. Each of them means the number of free spins that you are entitled to. Next, free spin begins. With each spin, one card face value is removed on the reels. This continues until they disappear completely.

Super spins – When there are only villains left on the reels, super spins begin in which the three middle columns are occupied by 3×3 blocks.