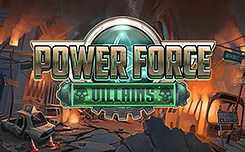 Large Symbols – the characters appear on the drums, occupying a square of 3×3.

Wild – creates combinations on its own, and also replaces ordinary symbols. On the reels Wild is depicted by long stripes.

Power force bonus – appears only in the middle columns, where it occupies nine positions at once. When any part of it appears in the visible part of the screen, the Heroes Take Over starts.

Heroes take over – In each cell, the numbers 1, 2 or 3 appear. They mean the number of free spins. Then rotations are started. At the end of each spin, the card symbol is removed from the drums until they all disappear. These symbols will not appear on the screen until the end of the game.

Super spin feature – As a result, when the letters on the reels do not remain, the game takes place in super-mode. In three middle columns, heroes fall out only in the form of large characters, occupying nine cells each.

This is really an interesting device with funny characters and exciting bonuses. Especially I want to mention, different types of characters and free spins.