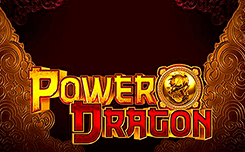 As a symbol of the Chinese nation, the dragon has very impressive opportunities. But who said that he is not generous with any other person? In the Power Dragon slot machine, a strong animal will show all its power and reward the most courageous players.

After downloading the slot immediately it becomes obvious how colorful it is. The background for it is a burgundy canvas with pink and gold patterns on it. In the upper left corner the name of the machine in golden-red tones flaunts. The playing field itself is also edged with gold.

As for the symbols on the playing field, then there is also something to please the eye. Already familiar Chinese lions, dragons, fish and other attributes will become the main participants of the combinations.

Since the Power Dragon is constantly active 243 fixed paylines, the player does not have to worry about the number of lines. Actually, it will focus on the amount of the bet – the total amount for one spin ranges from 0.50 to 25.

Due to the fact that 243 lines are always active, successful combinations will be added quite often. In addition, in this will come to the aid of a wild symbol in the form of a golden dragon, which will replace any missing in combination signs, except for the scatter.

Scatter in turn plays a very important role in this machine. After the loss of three or more Chinese coins launches an incredibly lucrative bonus game. As soon as this happens, 5 dragons appear before the player: green, purple, red, black and blue. On each is written the amount of free spins that will be provided to the participant. The player has the right to choose any of them. During free spins, the symbol of the selected dragon becomes a wild.

To add risk, the machine also includes a game for doubling. There is only one rule – red or black. If the color of the closed card is correctly guessed – the winning amount is doubled. So can last up to 5 times.