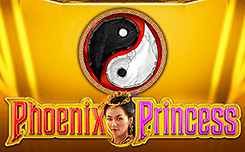 Phoenix Princess, a good slot with Chinese themes from the company GameArt.

As a basis for the new phoenix princess game, an ancient Chinese story about the golden phoenix, which fought with ancient monsters, was taken. The slot has a standard game structure, five reels and 20 winning lines. From the bonus features you can note: Bonus game with free spins and a changing wild mode that is active during free spin.

The design of the slot has a very colorful and beautifully drawn. The game screen is located on the background of an ancient Chinese castle, which is fully decorated with gold. On the playing drums you will find symbols inherent in the symbolism of ancient China: The beautiful princess, the ancient castle, the Chinese vase and the lotus flower are symbols of the upper meaning, which pay from 15 to 10,000 coins. Symbols of low value are 9,10, J, Q, A they pay from 5 to 1250 game coins. Wild symbol is made in the form of amulet yin yang, it can complement the winning combination. Scatter symbol is a fire phoenix, it activates the free spin.

Bonus game free spin is activated when a minimum of three scatter symbols appear on the first second and third game reels. You will receive 8 free spins, where all the symbols of the upper meaning (princess, castle, vase and flower) turn into a wild symbol, which significantly increases your chances of getting a good combination.