Miles Bellhouse and His Curious Machine 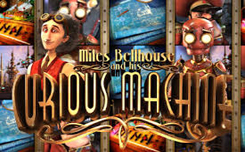 Slot Miles bellhouse and his Curious machine, has five reels and 30 paylines. It’s not just a game, it’s a whole story, fascinating and fantastic. The game has several interesting features.

“Second Chance” it runs randomly, when the launch did not bring any winning combination. In this case, she scrolls one of the reels, giving one more opportunity to win.

Also very interesting is the symbol Wild – the image of the funnel. If he does not create a prize combination, he unwinds the pictures around himself, changing their places. Which also gives an additional chance of winning.

The game has a scatter symbol – an image of a dinosaur. Three such pictures in any place of the drums launch free spins. During these rotations there will be a multiplier from x1 to x5.

When three characters, depicting a time machine, appear on the reels, a bonus game is launched, in which you will travel through time. Each new place you visit will bring you cash prizes, and the game ends when you return to Miles’s lab.

Slot Miles bellhouse and his Curious machine – an example of excellent graphics and really original story.