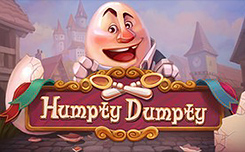 The developer company Push Gaming used a poem about Humpty Dumpty, which served as the basis for the eponymous slot.

The first thing you’ll see after launching the slot machine is the magic kingdom, whose inhabitants struggled to raise the main character to their feet. Before you appear the gallant retinue of the king against the backdrop of a beautiful palace.

The new slot machine is a project consisting of five reels and 25 paid bands. The lines are activated by default and can not be adjusted.

Throughout the game you will find standard elements in the form of playing cards, ranging from tens to ace. Collect the same images and get prizes. You also need to get acquainted with the majestic king, his wife and their faithful guard, as well as with the faithful companion – a dashing horse.

The role of the wild symbol is the image of crossed spoons in a gilded frame. This sign replaces other elements to make the maximum combination. If such a sign falls on any drum, you will get an additional spin.

A scatter symbol may appear on the third reel. When it spreads across the entire column, you will be given 6 free spins.

Among other things, you can accumulate special elements in the form of scarlet hearts. They are credited to the account of the column above which they are displayed. Once you can collect three hearts over a separate drum, it will be completely filled with wild until the end of this round.