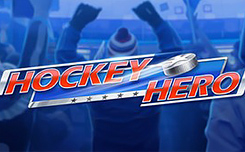 Slot Hockey hero, is equipped with five reels and has 40 paylines. Among the symbols you can meet hockey players, attributes associated with this game and standard card images. Of course there are special characters in the game:

Wild (golden cup), can appear in long strips, and also replace, other symbols to create a winning combination.

Scatter (gate), with the appearance of at least three such symbols, starts free spins.

Free Spins – The player receives five free spins. During these rotations you can see only one hockey player, as well as other simple symbols and Wild.

Hold and Respin – If the first column is entirely occupied by one of the hockey players, its image is fixed, and the remaining drums rotate again for free. Wild symbols also “freeze”.

The most interesting feature of the machine are repeated backs with fixed pictures and a round of free spins. In addition, there is no doubt that the hockey theme will attract to Hockey Hero many users who are not indifferent to this sport.