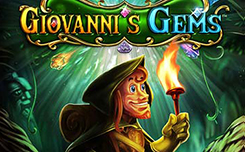 Online slot Giovanni’s Gems will invite players to explore the hidden cave, where they expect large gains for clusters of precious stones.

The set of characteristics of the gaming machine turned out to be quite unusual, due to the structure of the 7×7 field and the absence of lines, which were replaced by identical coincidences of the symbols.

Externally, the slot machine Giovanni’s Gems is made in the best traditions of the producer Betsoft, because the draws are accompanied by good graphics and special effects.

An important element of the slot was a collection of characters, which included jewelry, guns, torch and a portrait of the protagonist Giovanni.

An important role is played by exploding characters, which disappear from the screen to give way to new pictures. Such actions will help to collect several victorious coincidences.

FREE SPINS – activated from 7 to 50 rounds, which is determined by the number of dropped Giovanni symbols. Here, participants do not make contributions, and pictures of the diamond appear without additional conditions and bring fixed awards without taking into account clusters