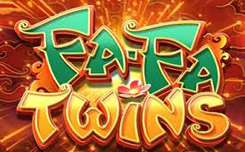 Fa Fa Twins is the newest slot machine from the prosperous and promising Maltese company Betsoft.

This time the company decided to use Japanese motives for its new game, thanks to which two charming Japanese twins appeared in the game. That’s why the slot got its name fa fa twins, which means “meeting of twins”. The gaming machine is simply visually crowded with various bright colors and symbols of Japan, for example: cherry, red lantern, goldfish, cats, bags of jewelry, as well as twins themselves, which are the most expensive symbols, and if the winning combination coincides, they will be happy for you and Show the original dance.

The video slot has 243 winning lines and probably one of the biggest pluses of the game is the Dual Reel function, where at least two adjacent reels will have the same symbols – if you’re lucky, double drums can fill the entire playing field, bringing the player a solid win .

The minimum bet in the game is 0.50 euros, and the maximum can be set at 125 euros (or the equivalent of these amounts in another currency). The only drawback for this slot is the lack of bonus games, but this fact completely covers the possibility of getting a solid win with the dual reel function.