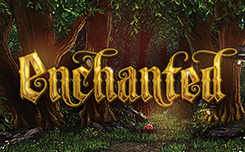 The game from the company Betsoft Gaming with the name Enchanted is a magical world full of fairy-tale characters, magic and mysteries.

Slot Enchanted – has 5 reels and 30 paylines. In the game there is no wild symbol, but there are free spins and a lot of various bonus games.

Crazy Hat – this game begins after the appearance of at least two characters with the image of a crazy live hat. For three rounds, one of the reels will be randomly selected and scrolled. The hat symbol in this game serves as a wild symbol.

Doors of Tonka – Tonk is a cheerful gnome. Every time a picture with a key appears on the drums, Tonk will come and take this key to himself. As soon as he has three keys, the bonus game will begin. In which you need to choose the closed doors that Tonk will open with your keys, after which, you will receive a cash prize.

Magic Book – at least three images of the magic book launch free spins, during which their number may increase.

Save the bird of Fira – Fira has a favorite bird that the green troll Rufus abducts. You need to save the bird and give it to the fairy. You will need to control the position of the fairy and her attack on the troll, using the arrows on the keyboard. The game begins after the pictures with the image of the fairy and troll will be next to any of the active lines.

Slot Enchanted is a very fun and fun game. A large number of bonus games makes it interesting and exciting.