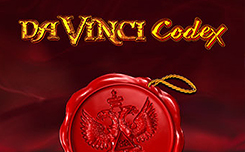 The secrets of knightly orders, riddles of great paintings and the conspiracies of the Catholic Church – that’s what inspired developers of the DaVinci Codex slot from GameArt.

Like the protagonist of the novel “Da Vinci Code”, users have to go to an unforgettable adventure, the outcome of which heralds a good winnings.

In the gaming machine there are 5 reels and 100 fixed paylines, which significantly increases the chances of winning combinations. A fascinating bonus round, special symbols and the ability to double the win in a risk game will force players to find out what a gambling spirit is.

In the slot DaVinci Codex excellent graphics with bright colors and good detail. The slot is made in red tones, decorated with gold frames. And the walls of the wooden box around the edges of the screen remind that users reveal a certain secret.

The symbols of the slot machine are presented in the form of the famous portrait of Mona Lisa, a golden bowl, a ring with the symbols of the Templars, a seal with a banner, a golden key, a Vitruvian man, a Masonic symbol – a pyramid with an eye. The remaining symbols correspond to card denominations. All these signs symbolize the most controversial facts and phenomena of our history. Therefore, it can be noted that the creators of the slot with knowledge of the matter approached its development.

Before we begin to play, we will understand the navigation functionality. The button with the gear will open the slot settings, in which you can enable or disable sound effects, and open yourself access to the risk game. “Paytable” opens information about payout ratios, bonus round rules and game line charts. The next window displays the amount of the bet. “Autoplay” launches an automatic game. “Spin” rotates the reels, “Balance” shows the current balance of the player, and “Total Bet” – the total bet. “Win” shows the size of the win.

To obtain winnings on the reels, combinations of the same symbols must be formed. Combinations are advantageous only when the first character is on the far drum on the left. The highest payout in the DaVinci Codex machine is for a combination of 5 scatter symbols. It will amount to the stake multiplied by 5.000.

After each spin that brought the winnings, users can double them in a risk-game. To do this, click on the “Gamble” button. In this round, you need to guess the color of the suit card. If the answer is incorrect, the winnings are canceled, the correct one is doubled. After doubling, the user has the opportunity to play a risk game again. In case of luck, you can continuously play for doubling up to 5 times.

The real luck for a player in the DaVinci Codex slot is a bonus round. He, as if on a cryptex, opens a combination of VINCI. There are no independent symbols in the slot corresponding to the letters from the combination. Therefore, they cover the active symbols of the slot.

The round itself consists of 6 free spins, during which the covered symbols from the main game will be replaced by red seals – wild symbols. These wilds significantly increase the probability of winning combinations, so in the long run, the overall amount of the winnings is high enough.

The DaVinci Codex slot machine has a non-standard and interesting theme, and an exciting gameplay. The plot of the slot is based on the popular novel “Da Vinci Code”, in which the author described the cryptex – the device on which you need to enter a combination, and then it will open the message that is stored inside.