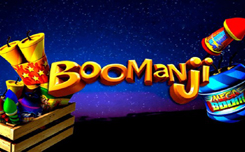 The BooManji slot has five reels and 10 paylines. Among the symbols you will see a large number of a variety of firecrackers, rocket launchers and other similar tools for creating a holiday.

The quality of graphics in BooManji is amazing with its realism and naturalness. In addition, in the game you will see a large number of animations – all the characters are fireworks, at the moment of formation of a winning combination they will explode, shoot, fly and cheer you up.

A distinctive feature of the video slot BooManji is that the winning combinations are formed in both directions. This option significantly increases the chances of the player to receive prize money.

The function of wild symbol in the gaming machine is performed by a box with salutes, which does not replace other symbols. It is only on 2, 3 and 4 drums, but at the moment of appearing on the screen it stretches to all three cells. In addition, the wild symbol runs one free spin, during which it will remain in its place.

Video slot BooManji does not have a fascinating storyline and a lot of bonus features. However, his excellent graphics and soundtrack can raise the mood of anyone who will play it.