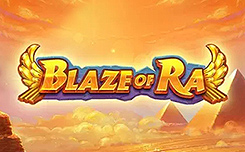 Slots on the Egyptian theme, are popular, and despite their large number, developers continue to release games about the pyramids and pharaohs. The company Push Gaming, was no exception, and released a slot Blaze of Ra.

Slot Blaze of Ra, has five reels and forty paylines. On the game screen, you will meet: Egyptian gods in animal images, sacred signs, lilies and map names from J to A.

Wild (the god Ra) himself brings payouts and replaces basic images in combinations, as well as special abilities in free spins and the bonus Nudging Wilds.

Scatter (Beetle Scarab) launches free spins. They start with three or more scatterers, which are in any cells. Before starting free spins, each of the scarabs gives one or two free spins. This determines their total number. The first, third and fifth columns are entirely occupied by wilds.

Nudging Wilds – If the Wilds drop out at least one column in the top two cells, this drum does not rotate in the next round, but only moves two places down. Thus, these two Wild symbols remain on the screen and help to make combinations.

This is a colorful model with spectacular animations and fascinating gameplay. Free backs with additional functions guarantee large winnings. In general, the slot is very interesting.