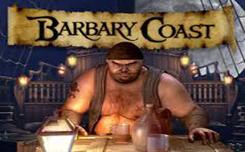 In the game Barbary Coast you will meet with the real pirates. The game has 5 reels and 30 paylines. You will find a fascinating adventure full of dangers and surprises, and your main enemy will be a captain named Blackbeard.

Three symbols with a picture of a parrot start free rotation.

Three characters of a pirate named Ben Savier will launch a mini round of Click Me. You just need to choose one of the three cells, and Ben, flying on the rope, will open it, thereby determining the amount of your winnings.

The cannon symbol, appearing on the middle drum, serves as a wild symbol. In addition, it stretches over the entire drum and stays in place during the next launch.

Three characters of a strong pirate with a barrel on the shoulder launch the next bonus game. You sit with the pirate opposite each other and fill the glass with a grog. After that, a coin is tossed, and you need to guess which side it will fall. If you guessed it, then the pirate drinks, if not then you drink. In any case, without winning you will not remain, just if you are the first to get tired, the amount of the prize will be less.

Are you ready to take the saber in your hands and save the beautiful lady? After the appearance of the three characters of the captain, you will have to do it. So, Captain Blackbeard kidnapped your lady named Maiden. You need to fight a duel with him to save her. And, of course, all this will be accompanied by making money.м