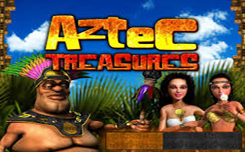 Aztec Treasures is a five-reel video slot with 30 winning lines. Among the symbols of this slot machine you will see the leader himself, his two girls, a pyramid, a tiger, precious stones and other similar symbols.

When a spear appears on the reels, you will see a movie in which the leader takes out a spear and throws it, and it strikes any symbol on the reels. After that, the symbol, into which the spear fell, becomes wild.

At the moment when the leader is between his two girls, you will see a video in which they will kiss him, and you, of course, will receive a cash prize.

Three characters with the image of a lizard on an active line run free spins.

Three symbols of the Aztec calendar on the active line will bring you an instant prize.

In the video slot there is an interesting feature called The Aztec Treasure. During the game you will see symbols that look like gold dishes with a precious stone inside. In total, there are three types of stones: red, blue and yellow. At the moment of appearance of such symbol on the drum, the leader appears and knocks out the stone from its place. After the stone falls to the ground the leader takes it and leaves. When he collects all three different stones, a bonus game begins

In the game Aztec Treasures there is another rather original bonus game. It will begin after the appearance of three characters with the image of the hut. You must help the leader in choosing a gift for the ladies. After giving a gift, the leader and both girls go to the hut. And you get bonus credits.