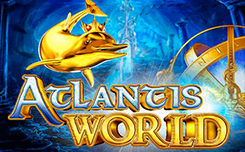 In total there are five drums on the playing field, each of which has four symbols. In the background, you can see a whole sea kingdom, in which works of architecture of different times are safely hidden forever. Also against the background is seen other inhabitants of the kingdom in question – fish that have strayed into flocks. Above the drums is the logo of the game Atlantis World.

Often in slots there are three kinds of special symbols: wild, bonus and scatter. And, very often the symbolism of the scatter is combined with the bonus. So it happened in the game Atlantis World.

Symbol wild, able to replace those characters that are not enough to build a combination – the golden dolphin. It can affect all symbols. The only exception is the scatter. It is also important to note that in the Atlantis World slot machine, a wild on the reels of the game does not scroll in random order, but necessarily appears with a series of symbols, 4 images in height.

Scatter symbol looks like a crystal ball, chained in steel strips. This symbol can drop only on reels 2, 3 and 4. When a player is lucky enough to see 3 images of the scatter symbol, then he receives a gift.

The bonus round of the game is an interesting entertainment, distracting gamers from a somewhat boring standard rotation during the game. With the help of the scatterer, the player can get into this round. Its peculiarity consists in the fact that it opens access to the free spins. In total, their game gives 5, but in the process of their rotation the player can get as many free spins. They can be obtained in the same way as in the standard game mode.