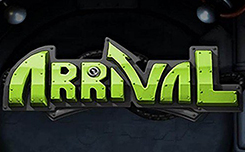 The Arrival slot has 5 reels and 30 paylines. There is no wild symbol in the game, however there are several bonus games. In addition, only two identical symbols are sufficient to form some winning combinations.

The first bonus game, begins after the appearance on the reels of at least three characters with the image of an alien. This bonus game provides you with free spins, during which one of the reels will serve as a wild symbol.

The second bonus game begins after the appearance of at least three pictures of the blaster. In it, a Marine under your control will shoot at flying saucers. The game will end when the collect appears.

The third game begins after the appearance of at least three images of the girl. In this game, the cunning aliens kidnap a friend of the infantryman, and you need to help him save her from the captivity of the alien. Of course, your participation in the rescue operation will be generously rewarded.

The game Arrival, like all 3D slots from the company Betsoft gaming is original, interesting and fascinating.