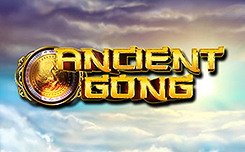 Now Gong is a popular musical instrument that is widely used in various orchestras and ensembles. But in ancient times, to the sounds of the gong, the commander led his army to fight the enemy. In the gaming machine Ancient Gong, the participant will also have to compete for prizes, and the gong will become an assistant in this difficult task.

As a screen saver on the screen you can see a lot of Chinese attributes, among them the gong himself – the main character of the game. After loading, the playing field appears, with the background for which are the blue skies and the temple on top of the mountain.

There are only 12 characters on the playing field. Among them, Buddha and tortoise, ship and precious vase, coins and a box, there are also ordinary card-marks, decorated with jewels.

The presence of a wild symbol – casket – makes the probability of a winning combination much higher. Also with this symbol is linked a bonus prize, which is awarded in a random way when a casket symbol appears. Then the player is awarded an amount of 2, 5, 10 or even 20 times the rate. However, wild is not in the right to replace the scatter.

A sign of the scatter in the slot was the image of the gong. Three or more scatterers will open a bonus round. If the user is lucky and it happened, 10 gongs appear on the field, and the participant should choose 5 of them. Each one has the number of free spins – 2, 3, 4 or 5. After 5 gongs are selected, all the numbers are summed up and the resulting number becomes the number of free spins for the player. During free spins, the wild symbol bonus function is also active, and all other winnings of the bonus game will be doubled.