How Are Slots Maximum Wins and Multiplications Counted?

Greetings! This article, a guide on slots, I want to devote to a rather interesting issue, which a lot of players face every day– “how are the winnings counted in slots?”

I noticed a lot that a large percentage of players don’t understand what the indicated payouts mean and how are they counted. In fact, everyone can understand this, the main things to know details! And in this article we will find it out together!

I think it will be interesting for many of you to finally learn and understand what do paytables mean, what is the maximum multiplication, and also some features and secrets of counting!

Let’s take a look at this type of slots on the example of the Immortal Romance from Microgaming, the slot that everybody loves. By the way, in this kind of slots from this manufacturer the paytable is implemented very conveniently – the payout is shown depending on your current bet, that is, if you change the bet, the whole table will also be updated.

Look at the paytable at the rate of $30. Let’s decipher it. 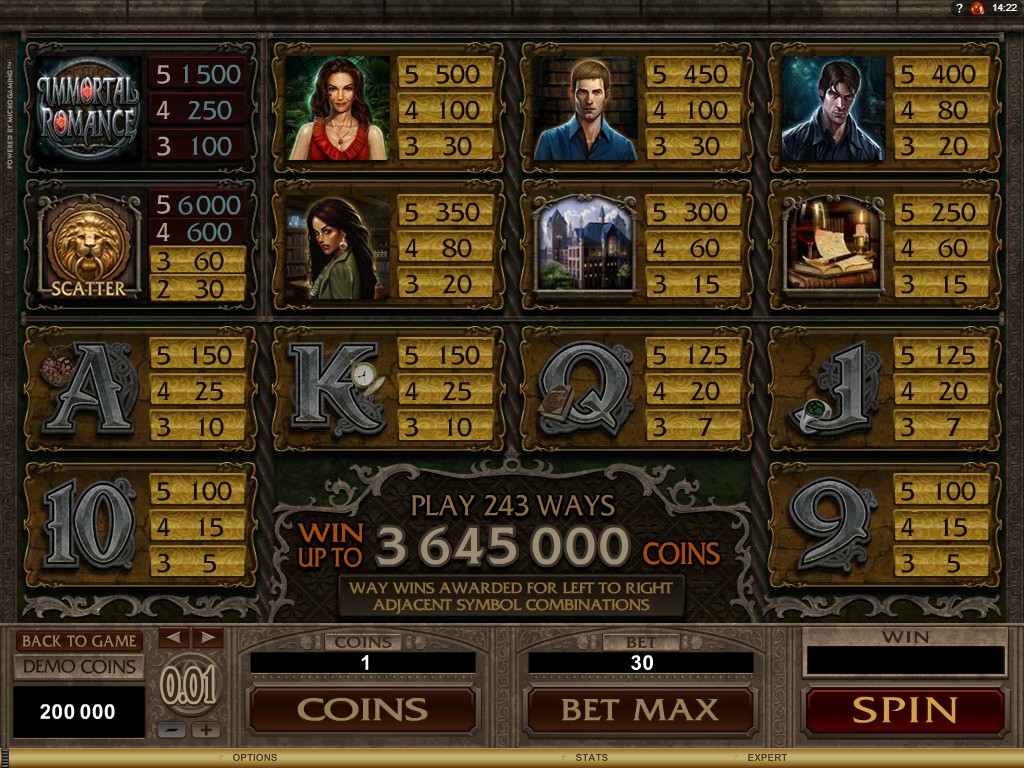 By the way, it’s a good idea to notice that often when you get 4 scatters, the bonus game itself does not give anything anymore, meaning that the slot has already given out the winnings by the scatters. The same happens when you get retriggers.

b. Symbols. Let’s take the most expensive one on the example of Sarah

Three Sarah symbols will give us $30, four – $100, five Sarah symbols – $500. In this caseeverything is simple! The rest of the symbols are counted exactly the same way,and you can’t get more than one symbol at a time on the reel, but in fact there can be more symbols, because we have wilds! And now it becomes more interesting!

This symbol herecan not only replace any other except the scatters, but also complements any symbol. It means thatwhen you receive this wild, five appeared Sarah symbols are doubled, and so on!

Let’s assume that we did not get five Sarah symbols on the reels, instead we got ten. Or that the line played twice! The popped up wilds in this slot do not only multiply the wins on paylines but also play by themselves! Three objects in a payline – $100, four – $250, five – $1500.

And this is done for a reason! Let’s move on to the most interesting part – the answer to the question“how much can a slot give us”!

Of course, many of us dream to catch fourreels with drops, and are even afraid to dreamabout five reels! And sometimes we face the question – are these five drops real at all?

I will answer your question –yes, they are real! Andto believe me you don’t even need to search screenshots! Everything is written in the condition: 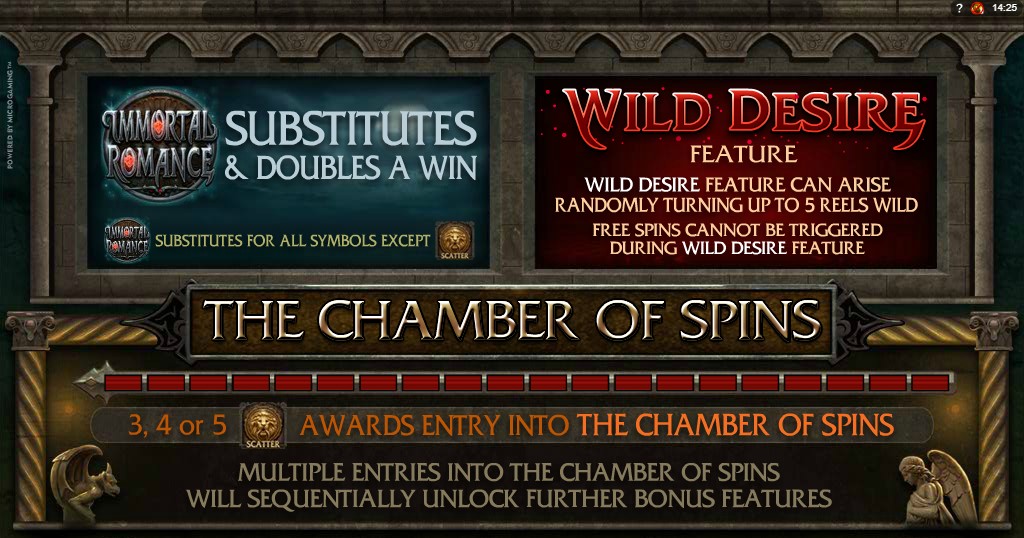 Firstly, it is stated that Wild Desire can pop up on five reels, and secondly – the maximum payout is always stated in the slot. What this means: the highest possible payout at the maximum bet in this slot, in this casino. In different casinosbets can vary.

Specifically, in our example, the maximum payout for us is $3,645,000. And maximum bet here is $300. And nowthe most interesting part, let’s count the payouts:

Let’scount the maximum multiplication of the slot:

364500/30 = 12150x. That’s a maximum multiplication that can be givenby this slot. If the maximum payout is not specifiedin terms and conditions of a slot, you can calculate it using another way:

So that’s how you can easily calculate multiplication by any lines and combinations in any slot.

I also want to note that the maximum multiplication in the Playboy slot is somewhat smaller and equal to 8100x. But what if wilds don’t give payouts for the lines? And if the number lines is not 243? And if the wilds don’t multiply the winning line? Let’s have a look!

а. Let’s take a look at this type of slots on the example of the popular slot Creature from the Black Lagoon from NetEnt.

It’s, in general, is not really more difficult than the first example, but here is a nuance – payouts are always indicated for one coin. That means, if the bet is changed, the paytable won’t change. But it’s not a problem! Let’s count: 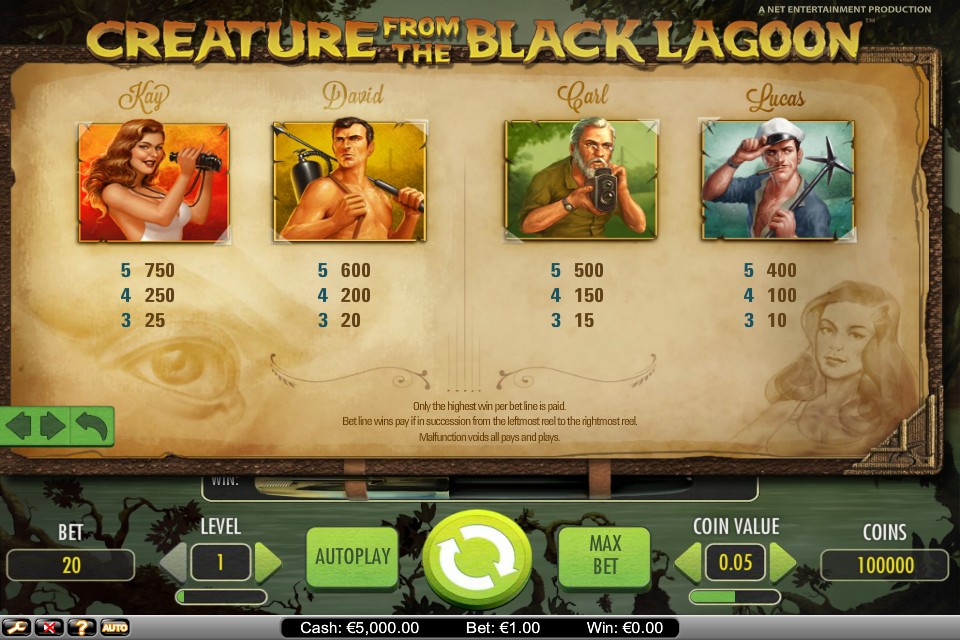 The most expensive symbol, a girl named Kay, will give us 25 coins for threepopped up symbols in one of twenty lines, 250 coins for four, and 750 coins for five.

If in the value of the coin you have two coins, then this winnings are simply multiplied by two. You can read it all in my previous article. If, because of the wilds, the symbol will play on two lines, it will already be 1500 coins.

b. Let’s look at another very famous and a little unusual slot from NetEnt – Space Wars, to understand how multiplication is counted in these slots 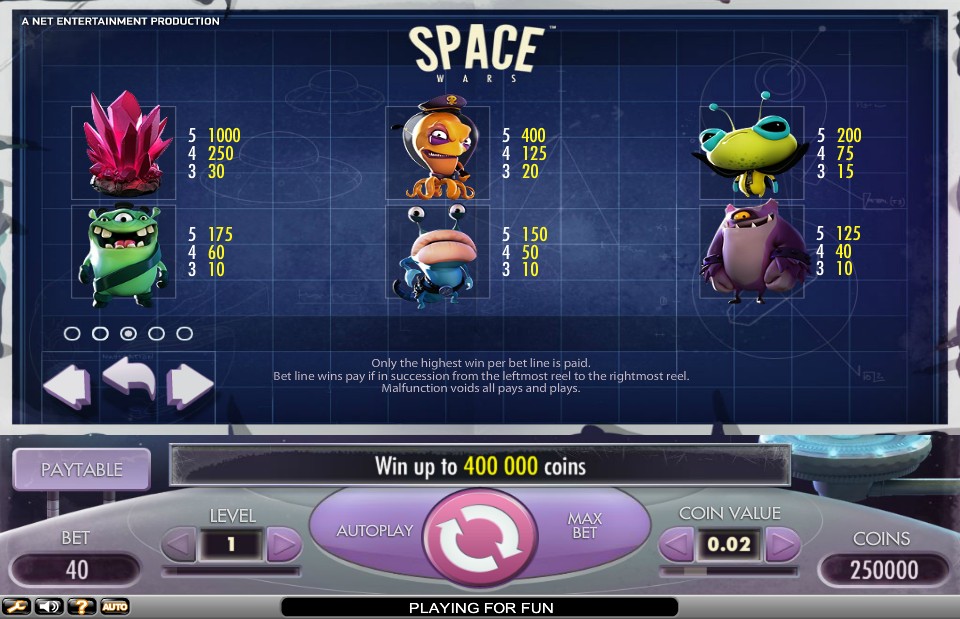 When popping up into the line the most expensive symbol will give us 1000 coins. One whole coin costs $40.

The number of lines in this slot is 40, so we multiply 1000 coins by 40 lines and get $40,000. That’s how much the slot will give if we get a fullhouse of Crystals – the most expensive symbol when playing by 1 coin!

As you already noticed, since in some slots from NetEnt the price is indicatedfor 1 whole coin, which in turn depends on the number of lines, then the table also indicates the maximum possible multiplication by the most expensive symbol, under condition that this symbol will be played on all the reels in this game or on all the reels with the help of wilds in other games. xd

в. Of course, I could not miss the slot called Jack and the Beanstalk and answer the main question of many players – “what is the maximum possible win in this slot and whether there are five harps here at the bonus game?”

Let’s define it together! First we consider the conditions: 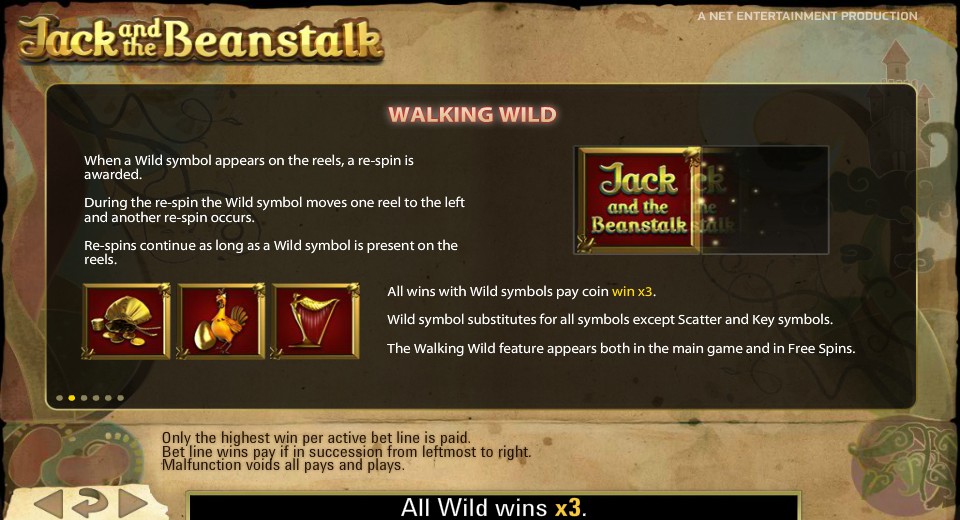 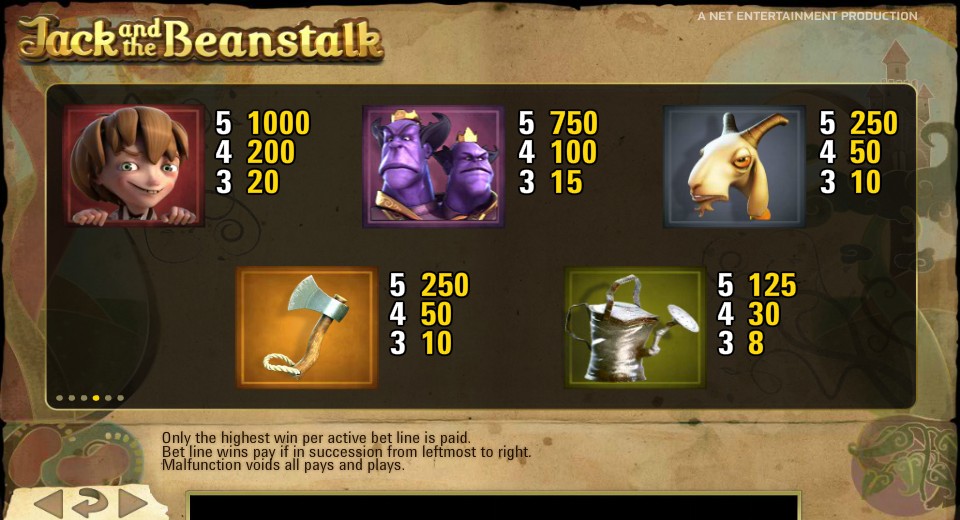 As we see, the maximum payout on the most expensive symbol is 1000 coins when playing by one coin, that is, in our case,$20 each. With the helpof wilds, including harps, all wins are multiplied by 3.

Since the wilds alone are worthless, then as in the example with the Lagoon slot, we count the payoutby the most expensive symbol. We multiply 1000 coins by 20 lines and get 20 000 coins. But next we multiply it all by 3, since wild is a multiplier of 3x.

We get 60 000 coins. That’s what will be the maximum payout if there are 5 harps on the reels!

That means the maximum theoretical multiplication for 1 spin here is 3000x. As I already wrote above, we can calculate it in NetEnt slots even easier –the payout by the most expensive symbol is multiplied by the number of lines and by 3.

It is necessary to take into account the possible multiplication of the wild symbol itself, as in the example with Jack. By the way, there is one interesting feature here! In the condition on the picture above it is indicated that you can win up to 600 000 coins.

$200 multiplied by 3000 = the maximum winnings of $600,000! And the fact that you’llbet more and the value of the coin, this is, unlike the Microgaming slots, is not taken into account here!

It means that the real maximum payout in this slot at the maximum bet of $4000 (the maximum level and the maximum value of the coin) will in fact be equal to $12,000,000 in the case of five harps popping up!

It’s an interesting feature! You know why? Cos it’s simple!

The fact is that initially the slots, naturally, were adapted to the currency. And it was impossible to bet more than one coin (right adjustment). A maximum of one coin. And in terms of the left adjustment (level), the maximum bet was reached and therefore the maximum win in the slot was displayed taking into account these maximum bets, set by both “handles”.

In rubles it was different because of the exchange rates. And so they raised the coin value when playing the rubles, but the information in the slot was not changed, since, probably, they would have to rewrite part of the slot for this. Have you noticed this feature before? xd

3. Slots like Book of Ra, Book of Aztec, Book of Dead and others.

Let’s look at slots like the book known to everyone! If you don’t understand how it’s counted, then let’s look at it together! These slots work all the same, let’s look at several slots and compare them.

a. A classic book from Novomatic: 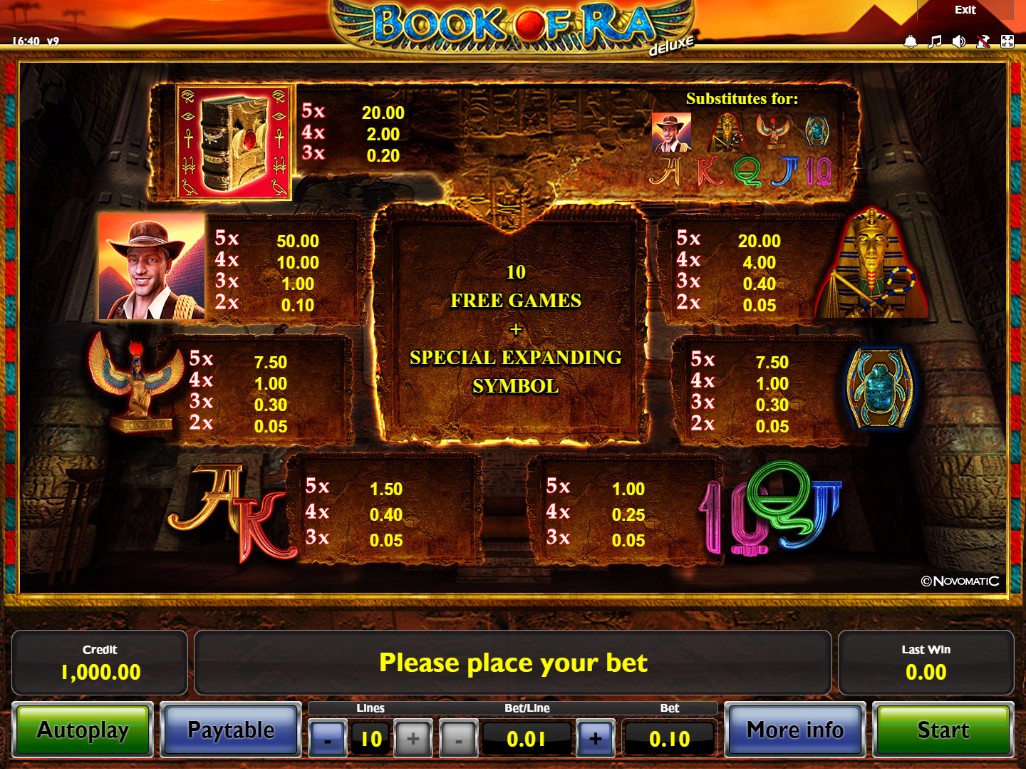 As you can see from the conditions, the payout here is indicated in currency, as in Microgaming, and it also changes with the bet change, except the cases when you change the number of paylines. The difference of these types of slots from others is that on whichever of the reels the symbols are popped up, in the book on the bonus game, they will always play, even if they are not one near another!

Outside the bonus game – top symbol and cheaper ones, in contrast to the cheapest, play by two. If you get two symbols, you get one bet back, and if you get five, 500 bets! It’s all on the same line. And what happens if this symbol is selected in the book and appears in the bonus game on a five-reel game? It expands and plays on all ten lines.

Let’s check on the payout table:

b. Slots with expanding symbols, that don’t always play:

In contrast to the classic “book” on the bonus game in this slot the popped up wild symbols also expand, but they don’t play in any case, only when there is a connected line. The maximum multiplication in such a slot is also counted easy: 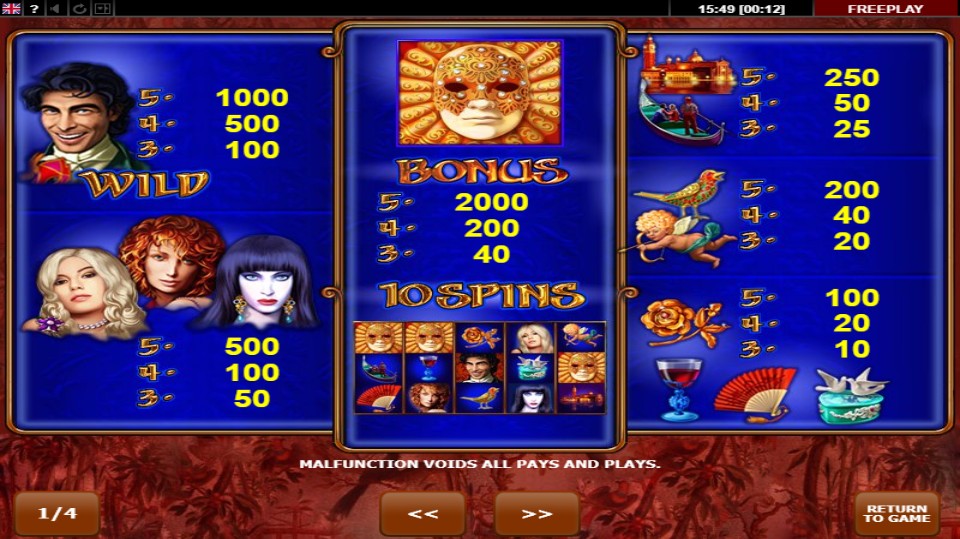 At a bet of 20 rubles, as in the example, five Casanova symbols give 1000 rubles. On the bonus game these five symbols expand on all the reels, that is, they play on all 20 lines.

I hope this article will be useful to many of you and now you understand what payots in tables mean and how payouts on different lines are counted, as well as multiplications in different types of slots!

Using these examples you can calculate the payout of any slot yourself!