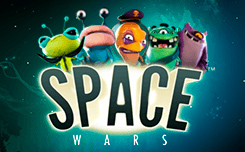 Slot machine Space Wars invites you to join the ranks of the military aliens, and try your luck in the space travel. Video slot features 40 paylines and 5 reels. Fast paced, interesting plot and numerous bonuses captivate from the first minute of the game. Function Re-Speen can bring huge gains, increasing the amount of your bet up to 50 times!