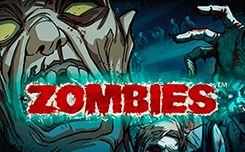 It is hard to say, on the basis of what film video slot Zombies was developed. Most likely, NetEnt use several sources, resulting a game story turned out really creepy.

Five reels and 20 lines of regular became container for ten main characters. They are: a circular saw, a respirator, brain, eyes torn, bloodied weapon and five denominations, drawn by mucus. Three elements Wild – ordinary, casually manifesting and stacking – replace the image, without which many combinations would be left unfinished.

Three vials image (Scatter) open up the prize stage. It consists of 5 turns by the casino and the same number of arcade games “Shooting a zombie.” During free spins extra-multiplier acts increasing incrementally from x1 to x10. At the end of ten rounds, the funds, received in the thematic game and free spins are reduced into a single sum.

Any humor, except black, there is not such one, but blood and horror will be in abundance. However, the slot machine “Zombies” is not only qualitatively scares, but also pays great, that is a good reason to visit the world of post-apocalypse.