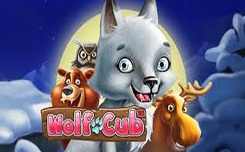 Wolf Cub, has five reels and 20 paylines. The game screen is decorated in the form of a snow-covered forest with a beautiful white wolf cub. The most expensive game symbols are five animals, cheaper ones, they look like gems and trees.

In the slot there is a bonus game that starts if at least three scatter symbols are dropped, when they drop out, the reels on which they fall make one more spin, determining the number of bonus rounds.

During the bonus game, an additional Blizzard function is launched, where you can get a solid win, even with a minimum match of characters. If the first drum is filled with identical symbols, the blizzard function is activated, the re-dropping of the symbol on other reels will completely fill the row. The most advantageous combination, if identical symbols, fill the first and fifth game drum.

In general, the new video slot Wolf cub is a great game from the company nettent with the new Blizzard feature and excellent design.