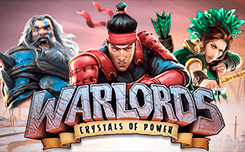 Video slot Warlords: Crystals of Power, consists of five reels and has 30 paylines. The game has simple and special elements, acting according to different rules, free spins with special features, additional prize functions, themed bonuses and other options for gameplay.

The Warlords: Crystals of Power video slot displays various game characters, their animals, as well as elements of combat equipment.

Wild (a gold medallion with three crystals) appears on all the reels and can form combinations. Also, it replaces other pictures, except for the scatterers, if necessary.

The Barbarian Hammer – In the randomly selected cells in the first four columns appear four Wild symbols, which are built according to the 2×2 scheme.

The Priestess Arrow – In any positions on the screen arise from two to five additional “wild” characters.

The Samurai Sword – Somewhere on the first four drums, one to two lines are built from two to five Wild.

Free Spins – In the machine there are three types of free-spins, related to different types of scatterers. They have special sets of drums, additional multipliers and other bonuses.

Respins – Repeated backs are triggered by two or three identical scatters. Active Scatter symbols remain on the screen, and the remaining images are changed to new ones to give a chance to get the right to participate in free launches.

Battle – If on the reels there are two different scatterers, the battle of the characters starts with the possibility of receiving a prize.

This is a great game with an unmatched design, impressive graphics and an incredible set of all kinds of bonuses and prizes.