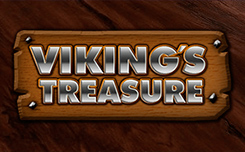 Ancient Vikings would be very surprised if they knew that the memory of them will remain in the form of numerous games. For example, their exploits are sung by 15-line slot Viking’s Treasure. By the way, this automatic adjustment system allows to put only 2 cents per spin.

The most important payment symbols are: a golden-haired woman, shield, battle ax, a horned helmet and drakkar with a striped sail. Swedish developer did not fail to add to the set also six Scandinavian runes. A Warrior (Wild), is though harsh, but fair – by sweep of the sword he will connect two disparate fragments into a coherent combination. In addition, this character itself makes the value chain of up to 10 000 bets.

Viking’s Treasure has a simple story, a good design and a high rate of return, which makes it suitable for users with modest gaming experience. That is why, despite the abundance of “creative” slots, this model will always be in demand in the casino.