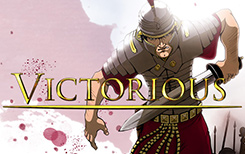 Once invincible Roman legions kept at bay the whole of Europe. In turn, the video slot Victorious will help you to plunge into the atmosphere of those glory days. The model is equipped with a 5-reel, and she has no pay lines.

If the same elements are on adjacent verticals, you are scored the winning by method 243 Ways at a minimum rate of 0.25 of credit. Soldier Swordsman, marching cohort, centurion and Caesar – these are characters to build the most expensive combination. A more modest but regular promotion are awarded for falling of six playing cards resembling a mural. Golden eagle (Wild) is a special element that replaces all of the images except the scatter.

Laurel wreath (Scatter) not in vain is considered a sign of victory. From three to five of these attributes are 15, 20 or 25 free spins, 5-50 total bets of award and triple payments for chains collected in prize spins.

Victorious became the first, and hopefully not the last “ancient Roman” gaming machine of NetEnt. Especially the design and functional of development turned out to be extremely successful, so all wondering what else giant of slot making will be able to squeeze out a new theme.