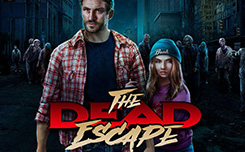 The dead escape – a new slot with zombie themes from the company habanero. The new slot machine has five reels and 30 paylines, which work in both directions, that is, you will receive winning combinations from right to left, and from left to right. Video slot the dead escape is launched from any device with a minimum bet of 0.30 euros, you can get a few super bonuses. The function is free spin, with an unlimited number of free spins, and also a bonus game of killer monsters.

Visually, the slot will appeal to all fans of horror, because the main idea of ​​the slot is exactly horror. On the game drums there are symbols of all sorts of monsters and their symbols, you will also see two characters, a woman and a man who are zombie hunters and heroes of the new slot. A symbol of a terrible zombie, is a wildom and replaces any symbol of the slot.

Bonus game free spins is activated when three symbols are scattered, which looks like a yellow pickup. Initially, you will have 15 free spins with the monster kill function. Pay attention to the two heroes, if one of the heroes falls out next to the zombie, the function in which you want to kill the zombies is launched. The zombie is a wild symbol, the killed monster will fill the entire game drum on which it fell, that is, you get a function called a mega wild. But that’s not all, every wild symbol that is present in the winning combination will bring one additional spin, so you can get an unlimited amount of free spins with the monster kill function.