Sam on the Beach 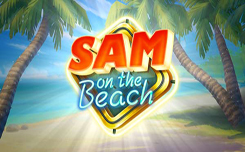 Slot machine Sam on the Beach will return users to the family of a funny troll Sam, who decided to go to his uncle Ted on a tropical island. The new adventures of the main characters promise to become even more interesting.

Visually, the game Sam on the Beach is very similar to its predecessor, due to the presence on the drums of portraits of the same characters. In addition, the slot received Wild and Scatter, which depicts a golden bell.

Respin – played out with fixed wilds, when on the horizontal line stop all four representatives of the family of trolls. The latter just turn into an additional wild for a period of one Respin.

Sticky wild – function occurs in free spins, when on the drums of the slot machine Sam on the Beach remain fixed wild. The meaning of such a symbol determines Sam randomly, if it falls out of a set of 3 or more titles.

Sticky multiplier – the owner of a tropical island called Ted will add constant multipliers to the field of the slot machine when stopping in the right amount.

Collapsing reels – special skill of the younger representative of trolls Maggie will help to clean without winning symbols from the screen. Such actions are accompanied by explosions of empty cells and the appearance in their places of new images for the formation of subsequent combinations.