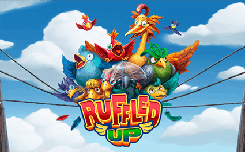 Wild (a yellow bird with a long neck) falls only on the second and third drums, occupying all three cells vertically. It does not pay for itself, but replaces in the chains other elements, except for the scatterer.

Scatter (a gloomy bird under an umbrella) appears in any positions and brings payouts regardless of location. At the same time there are at least two such birds. When they are paid on them, the round does not end immediately. These characters fly away, and their places are occupied by other birds. If additional combinations are formed, they are also paid. At least three Scatter, activate free spins.

Free Spins – Three, four or five Scatter, activate ten, fifteen or twenty free spins. In free spins, the wild appears on the first three drums. In any of them, individual birds can be struck by lightning. For each of them, a payment is calculated.