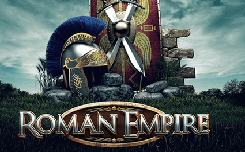 In the new game Roman empire from the company Habanero before our eyes comes to life the great Roman Empire.

This period of history, has been demonstrated in various films, and now fans of slots can enjoy it, while winning money. You can play Roman Empire in casinos working on the Habanero platform.

In the slot Roman Empire 25 paylines and has an average volatility. It is reproduced from both computers and mobile devices.

On the drums you will meet: arena for battles, helmets, shields, Cleopatra and Caesar.

The most interesting feature is a round of free spins, which begins when three characters with the image of the Colosseum appear on the screen. During this round, players can get an unlimited number of free spins.