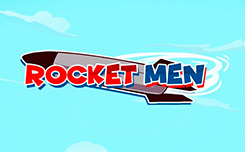 Rocket Men – a video slot with five reels and twenty fixed lines. The characters on the screen are arranged in a 5×3 scheme. The game machine offers eight standard icons, wild, bonus symbols and other options.

In addition to the denominations of playing cards, a hamburger with dynamite, a duck in a military helmet and an inscription DON appear in the columns of the slot.

Wild (two missiles) – depicted on all the drums and can itself form chains. It also replaces the basic pictures in combinations.

Bonus (Donald Trump) falls only in the first column. He starts the draw of Don’s Driving Range. Trump begins to play golf, knocking balls on the symbols on the drums. He only knocks out unnecessary icons that prevent composing combinations.

Bonus (Kim Jong-un) occurs only in the fifth column. This symbol begins the round of Kim’s Little Game. Kim fires rockets on columns, destroying simple pictures. Wilds appear instead.

Kim VS Don – The opponents are shelling each other until one of them wins. When the battle in the Kim VS Don round is over, one of the following games begins:

Boom Time – If Kim wins, missiles appear on the secondary screen. You can choose them in any order. All missiles hide various payments.

Party Time – If Donald wins, you also have to make a choice. But in this case we are talking about women in a bikini. They also bring winnings.