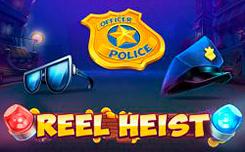 Video slot Reel heist, has five reels and 40 paylines. In the game there are simple and special symbols, as well as several functions of the prize, including thematic rounds.

On the reels of the slot there are five denominations of cards, sunglasses, handcuffs and badge. In the columns, the same icons can go one after another.

Wild (cop) appears in randomly selected cells during rotation. It is not paid, but replaces other elements in combinations. He also participates in bonus rounds.

Bonuses (robbers) also appear during rotation in different positions. In their hands, they retain the search notice with the amount of compensation. Criminals participate in the prize rounds.

Wanted Poster – When the officer and the bandit find themselves together on the screen, the policeman begins to pursue the robber. In each back, characters move, one position horizontally or vertically. If a policeman manages to catch a thief, the player is awarded the reward indicated on the poster.

The slot machine “Robbery of drums” makes a good impression due to its excellent graphics, original bonuses and convenient design with great functionality.