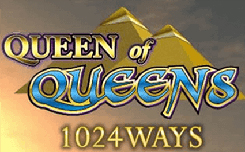 The company Habanero released a slot Queen of Queens II, it is very similar to its predecessor, but still the distinctive features in it are present.

The Queen of Queens II slot is presented with 5 reels and 1024 paylines.

The slot design fits the theme of the game. The drums of the game are all also on the background of an ancient manuscript, with a variety of hieroglyphs inherent in ancient Egypt. And in the background there are pyramids and all the beauty of this culture can be seen.

As in the previous version of the slot, the predominant color is gold. Among the presented symbols, no significant changes occurred. They correspond to this subject: large expensive stones of various ornaments, cat and bird figures, well, and special symbols.

Wild – queen, drops out in all columns, replaces simple images to complete the winning combination.

Scatter – appears anywhere on the screen and brings payments on its own. At least three such symbols activate the bonus game free rotation. You will be able to test your luck in 8 free spins, which involve additional wild symbols, which can fall out in any number, throughout the game, which significantly increases the chances of a big win.