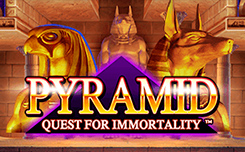 Each of us at least once but heard stories about the mysterious Egyptian pyramids. The Egyptian theme remains popular in the world of video slots for several years. The company NetEnt is no exception and has released an innovative slot game Pyramid: Quest for Immortality.

The first thing that catches the eye is the unusual structure of drums: 3x4x5x4x3. No less interesting is option «Avalanche», which incidentally has the popular video slot Gonzo’s Quest. The essence of this function is that the characters will “fall” in avalanche-like manner, thereby increasing your chances of success.

Video Slot brings us into the world of the Pharaohs and the ancient gods. But before going into a mysterious adventure, choose the optimal bid. Rates range can be change at any time in the Coin Value section. Section Level will quickly adjust the number of coins per active line. Have you accustomed to risk on a major? Click on the «Max Bet» and start the spin at the maximum rate. «Autoplay» mode easily configures auto play, which is a big plus.

The main feature in games slots – there are two wild symbols. Simple Wild is an ancient Egyptian symbol Ankh (Egyptian Cross). This symbol will not only replace any image, but also bring additional spins as scatter image is not here. Wild Generation is a second wild symbol which appears solely at 2, 3 and 4 drums. This symbol makes all the same pictures as the usual Wild.